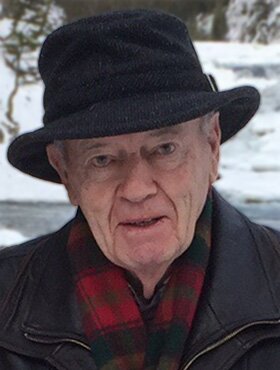 David was born in Cambuslang, Scotland in 1931. He grew up in Croftfoot, Scotland with his parents, John and Helen (nee Stirling) Lowe, and two brothers, Tom and Jack. David married Eleanor Knight in 1957 and immigrated to Montreal, where their children were born. Many of his family immigrated to Canada around the same time. David, his wife Eleanor, and family returned to Scotland, but they eventually after a few years, moved back to Canada and settled in Toronto, where they raised their son Derek and daughter Alison.

David always loved to be on the road. In his younger days in Croftfoot, he took many trips across Scotland and England on his bicycle and motorcycle with his family and friends. His favourite trip was on his motorcycle through the Alps. During his childhood, holidays were camping throughout Scotland, and he continued doing this with his own family after coming to Canada. There were many camping trips across the provinces, and, no matter what the weather, David was always lighting a fire and putting the kettle on for tea.

Later in life, David met Caroline Wickett, and they were married December 26, 1986. After a few years, they moved out west and settled in Redwood Meadows, Alberta. With extended family in all parts, a retired David and Caroline enjoyed many road trips. They often travelled in their Fifth Wheel, visiting their children, grandchildren, family and friends across North America. Their travels also took them to Scotland to visit family, on ocean cruises to Alaska and Hawaii, and on a river cruise up the Danube.

David was a loving husband, father, grandfather and great-grandfather. He always loved spending time with his family. He was always ready to give his opinion or advice but was never offended when you didn’t take it. He had a quick wit and dry sense humour, a family trait. Not everyone understood it, but we have all laughed at the many funny stories passed down through the years.

He will be greatly missed by all his family, but his lasting legacy will stay with us in our hearts.

A Celebration of David’s Life is anticipated to be held in the spring of 2023, location yet to be determined. Condolences, memories, and photos can also be shared and viewed here.