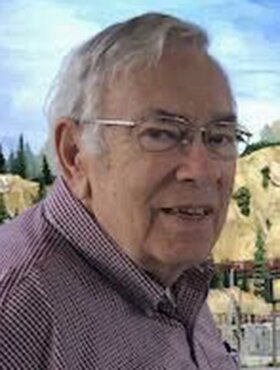 It is with great sadness that we announce the passing of our beloved husband, father and grandfather, Robert “Bob” Hadlow after a short illness. Bob is survived by his wife of 60 years, Patricia “Pat” Hadlow (nee Edmunds), son Rob Hadlow of Calgary, AB, and daughter and son-in-law, Carolyn and Richard Crooks of Port Moody, BC; along with grandchildren, Emma Crooks-Henson (Francis Henson) of Coquitlam, BC, and Nolan Crooks of Port Moody, BC.

Bob grew up in Edmonton in the Highlands area and attended Eastglen High School. There he participated in many sports teams in addition to being a member of the Edmonton School Boys Band. At the Rainbow Ballroom, he met his future wife, Pat, and in 1962 they married. After a couple of years in Peace River, they returned to Edmonton where he worked at the University of Alberta as an Administrative Assistant in the Chemistry Department. In 1970, they moved to Calgary when Bob took the same position at the University of Calgary’s Chemistry Department where he remained until his “retirement” in 1996. He then worked for 6 years at Jack Carter Chev Olds.

Outside of work, besides his family, Bob’s true passion in life was trains. He was a member of numerous model railroad clubs in Calgary including the Calgary Model Train Association and Southbank Shortlines where he volunteered on organizing boards and for many meets and shows. He greatly valued the many friends he met over the years enjoying this hobby.

Bob enjoyed many hobbies and his trips to the shores of Hawaii and other places with lifelong friends, Mal and Sally Hadley. Jazz, Big Band music and sports (Edmonton Eskimos [Elks] & New York Yankees) were also mainstays in his life.

A special thanks to all the medical staff at the Foothills Medical Centre's Unit 54, ICU A, ICU B and Unit #36 (Special Services) for their excellent care, kindness and respect given to both Bob and his family.

Funeral Services and reception will be held at McInnis & Holloway (Crowfoot, 82 Crowfoot Circle NW, Calgary, AB), on Friday, December 2, 2022, at 2:00 p.m. Condolences, memories, and photos may be shared and viewed here.