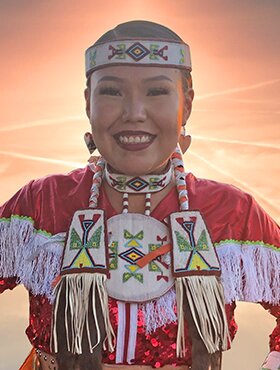 On Tuesday, November 15, 2022, we lost a young, beautiful, potential leader among the Stoney Nakoda Nation. Tomielyn Summer (Haze) Twoyoungmen left us to meet her beloved papa and mama, Jay and Lynne Eyma, and also her great ancestors. Summer is a fifth-generation descendant of Ozinja Thiha, Chief Jacob Bearspaw, a signatory to Treaty No. 7.

With her outgoing personality, she made friends everywhere she went and was in the process of rekindling friends on the powwow trail. She was a jingle dancer and really believed in the healing power of the jingle dance.

Her passion was to make the Stoney Nakoda reserve drug-free so that the up-and-coming generation will have a safe place and have a better chance to succeed in the world and to help heal those in addiction to recover. Being a recovering addict, she knew the inside world of drug use, and how prevalent it was on the reserve. She knew the conventional way of combatting the drug problem doesn’t address the extent of the drugs permeating the reserve.

Her phrase was, “You can’t keep doing the same thing and expect different results.” She had other ideas which antagonized others, but she understood that something different was needed to shake up conventional thinking and she did – to establish a bylaw to ban drug dealers, both non-nation and nation members. She also believed in land-based healing and teachings to help addicts. She was an activist and a warrior. She created a group Wa’ca’ga’ O’ko’no’gici’ya’ bi’ (Battle against drugs in the Stoney Nakoda Nation). She was also a member of Sober Crew Calgary helping those battling addiction, feeding them, and providing them with necessities. Sober Crew was her family. She grew up believing in the traditional ceremonies and culture of the Stoney Nakoda Nation. Summer left such an impact on her home reserve as well as other places as well as on social media. Her absence will be felt.

Funeral Services will be held at Bearspaw Youth Centre (Morley, AB) on Thursday, November 24, 2022 at 11:00 a.m.  Graveside Service to follow at Bearspaw Cemetery (Morley, AB).  Condolences, memories, and photos may be shared and viewed here.

Share Your Memory of
Tomielyn
Upload Your Memory View All Memories
Be the first to upload a memory!
Share A Memory
Send Flowers