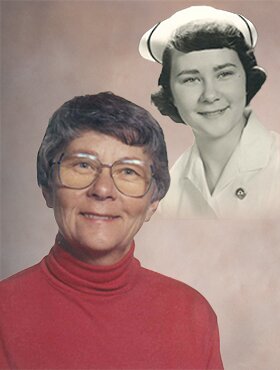 Wilda Margaret Allen (nee Colwell) of Calgary, AB, passed away peacefully on Friday, November 18, 2022, at the age of 87 years.

Wilda was predeceased by her husband of 64 years, Douglas Allen and her parents, Margaret and Charles Colwell. She is survived by her three children, John, Robert (Marisa) and Peter (Jennifer). Wilda also immensely loved her three grandchildren, Charlie, Ashley, Sienna, and Spencer. She will also be greatly missed by her long-time friend and helper, Tammy Campbell.

Born and raised just east of Calgary in Dalemead, Wilda grew up with her brother Murray Colwell where they rode their horses to school each and every day. Shortly after, it was off to Calgary for high school and then onto the University of Alberta where she would obtain her degree in dietetics.

It was in Edmonton where she met Doug and their life together began. Doug and Wilda made and stayed close to the very end with the many friends that they met while at U of A. Post graduating from university and after a brief time in Ontario, the couple returned back to Calgary and started their family.

Wilda was proud to be the granddaughter of Lachlin Mackinnon, an early Alberta pioneer and well-known rancher. It was this family connection that helped Doug form his legacy business, Mackinnon Allen and Associates.

During this time, for many years Wilda managed the family business of Colvan Property Holdings which was started by her father Charles. She was an astute manager and along with Doug built long standing relationships and grew the business over the years.

Throughout her life, Wilda always put her children first, and volunteered at her children’s schools, and for their sporting teams. Later she took pride and became an active participant with the Samaritan Club and to the end stayed close with many of her fellow members.

In 1987, at the age of 52, Wilda was diagnosed with Multiple Sclerosis, but that didn’t stop her from “finding a way” and traveling for almost 2 more decades. Whether it was sailing with their friends in the Caribbean or hosting their many friends and family at their condo in Scottsdale, Wilda always made everyone comfortable and she never complained of her plight in life.

The MS may have limited her mobility, but it never stopped her can do attitude and spirit. Right until the very end, Wilda always worked to help others, as evidence of her role as a volunteer on the residents committee at her final home at Wentworth Manor.

Throughout her life, Wilda was a kind, loving and inspiring friend, wife, and mother.  Her legacy will live on forever through the many people she inspired and touched.

The family would like to thank the many staff, nurses and doctors, of Wentworth Manor, who took such great care of her.

Share Your Memory of
Wilda
Upload Your Memory View All Memories
Be the first to upload a memory!
Share A Memory
Send Flowers