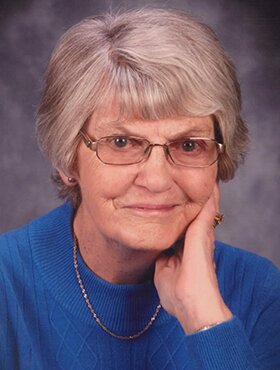 Margaret was born in Regina, SK, on April 10, 1940. She grew up in Regina and spent much of her spare time helping her parents, Irene and Hugh, in Forgie’s Bakery where she learned her love of baking.

Margaret married Ervin on September 7, 1957, and started raising their family in Regina. Many enjoyable summers were spent at Regina Beach with family at their shared family cottage, Peter Pan. Margaret and Ervin moved to Calgary and continued to raise their family there over the years. They attended classes to learn and help them build a house in Airdrie where they lived for some years. They then moved back to Calgary and called it home for the remainder of their years. Margaret valued family and providing care and support for her children and grandchildren over the years.

Margaret lost her loving husband, Ervin, on August 20, 2007, just short of their 50th wedding anniversary. After his passing, she explored her love of travel with her family on trips including Las Vegas (for her 70th birthday), Hawaii, Jasper, and back to Regina Beach!

Margaret enjoyed celebrating her faith at Good Shepherd Church with her church community. She was a social butterfly who had many friends whom she would visit over coffee. Margaret had a fond love for her cat Bailey who provided great comfort and companionship to her. Bailey enjoyed sleeping on her lap and was Marg’s shadow following her around, often getting a reward of food for her efforts.

Towards the end of her life Margaret resided in a long-term facility battling dementia. We thank Care West for their dedication and the medical care provided.

Funeral Services will be held at McInnis & Holloway (Crowfoot Chapel, 82 Crowfoot Circle NW, Calgary, AB), on Sunday, November 27, 2022, at 2:30 p.m. Reception to follow in the Hospitality Centre at the Funeral Home. Family and friends who are unable to attend in person are invited to join Mrs. Lenzin’s service streamed live (see below) on the day of the service. For those who are unable to view live, a recording of the service will be posted. Condolences, memories, and photos can also be shared and viewed here.

If friends so desire, memorial tributes may be made directly to The Alzheimer Society of Alberta and the Northwest Territories, Administrative Office, 10531 Kingsway Avenue, Edmonton AB T5H 4K1. Tel: (1-866) 950-5465, www.alzheimer.ab.ca .

Click here to view the service folder for Margaret Lenzin