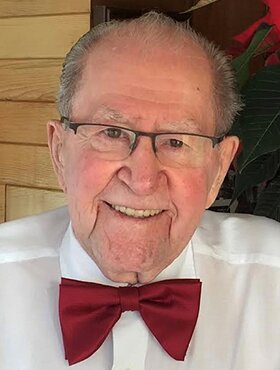 Joe McAreavy, beloved husband of the late Ruth McAreavy (nee Sherritt) of Calgary, AB, passed away on Monday, November 21, 2022 at the age of 94 years.

Dad was born in Vegreville, AB to William and Ann McAreavy. He had many interesting occupations in his 94 years but most notable was his time in the Royal Canadian Navy which was the catalyst to his career as a radio operator for The Federal Ministry of Transport. He retired in 1982 as a RO6 and managed eight stations in Alberta.  He had over thirty years of service. During his career, he was stationed in Dease Lake, BC, Yellowknife NWT, and finally Calgary AB. Dad and Mom made many good friends and memories at every place they lived.

Dad married mom, Ruth Sherritt, the love of his life, in 1952 and became the proud father of Dennis (Mary), Donnie (fiancé Dianne), and Lorinda (Brian). He will also be lovingly remembered by his grandchildren, Jeremy, Michael, Cassandra (Anthony), Kevin (Dawn), Stephen and Thomas, as well as great and great-great grandchildren, many nieces, nephews, brother-in-law Joe and Pat Sherritt and his sister Marilyn Ryan. Dad was predeceased by his wife Ruth, daughter-in-law Heather, and seven siblings, Charlie, Lawrence, Nellie, Henry, Beatrice, Leo, and Teresa.

Dad was an accomplished musician and played the organ and accordion at many dances and parties, as well as for his own enjoyment with family and friends. One of his favorite memories was being flown by cargo plane up to the Con Mines, NWT along with his organ for a New Year’s Party, quite a memorable experience. In later years he played with the Renfrew Ramblers and entertained at numerous senior’s homes.

Being that dad grew up on a farm, he was skilled at many things. He enjoyed gardening, putzing in the garage, hunting, music, videography, travelling, and restoring his vintage 66 T-Bird for the many car shows that he and mom participated in. Dad had a great sense of humor and was known for often pulling pranks on co-workers and friends.

A Private Funeral Service will be held at a later date. Condolences, memories, and photos can also be shared and viewed here.

Share Your Memory of
Joseph (Joe)
Upload Your Memory View All Memories
Be the first to upload a memory!
Share A Memory
Send Flowers