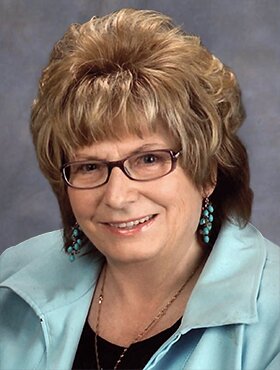 Lorrane Couture beloved wife of Marcel Couture of Beiseker, AB, passed away on Tuesday, November 22, 2022 at the age of 78 years.

Lorrane was born in Regina, Saskatchewan on October 21, 1944. She graduated from the Marion High School in 1962. Lorrane met Marcel through friends, and they were married in 1966 in Regina, SK.  Later they moved to Calgary, AB in 1970. Then purchased land and built a house in 1979 by Beiseker which is their current residence.

Lorrane worked for WCB SK until 1969. After that, she was a homemaker until herself and Marcel started an Oil & Gas maintenance company in 1992. She retired in 2002 but was still actively involved in the company.

Lorrane accomplished much through her life and was particularly proud of her three children and seeing her grandchildren. Lorrane enjoyed being with her friends and family, travelling, playing card/board games, watching sports but mostly curling and baseball, teaching the next generation her baking, cooking and canning skills, reading, camping, gardening

Lorrane is also survived by her brother and sister-in-law, Robert and Gayle Bechard of Craven, SK; two sisters and two brothers-in-law, Dolores and Mel Molnar of Olds, AB, Yvonne and Jim Van Drunen of Yarmouth, NS; as well as numerous nieces, nephews and cousins.

Lorrane was predeceased by her parents, Jeannine and Rene Bechard, and sister and brother-in-law Denise and Leroy Tiffany.

The family would like to thank everyone who has reached out to them with words of encouragement, meals and all those who have helped and offers of help during this difficult time.

Funeral Mass will be held at St. Mary’s Catholic Church (2 Ave, Beiseker, AB) on Monday, November 28, 2022 at 11:00am. Reception to follow at the Beiseker Community Hall. Condolences, memories, and photos may be shared and viewed here.

Share Your Memory of
Lorrane
Upload Your Memory View All Memories
Be the first to upload a memory!
Share A Memory
Send Flowers