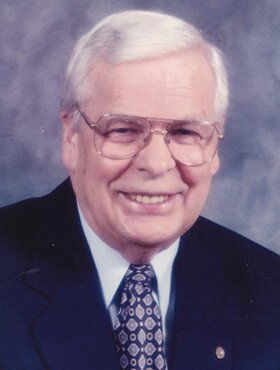 Jack Beaton, beloved father of David Beaton (Dianna) and Kathleen Kind (Gerry), passed away peacefully surrounded by his family on November 22, 2022, at the age of 90 years.

Jack grew up in the Lower Mainland of BC, where he met and married his high school sweetheart, Virginia (Ginny) Watkins. During high school, he played and excelled at many sports, his favourite being basketball. He and Ginny enjoyed lots of fun times with their classmates and stayed in touch with most throughout their lives.

Jack’s career started in the Lower Mainland in banking, until opportunity knocked, and they moved to Calgary, AB. Jack was hired on with Texaco Inc. in May 1953 and began his career as an accountant, which would serve him well in various positions, ending with the title of Treasurer of Texaco Canada. Jack retired in 1990 after thirty-seven years of service.

After retirement, Jack spent many hours and years volunteering for Foothills Hospital. He developed many close friendships with the patients he helped. Jack also enjoyed league bowling and was an excellent bowler. Gardening, especially tending his large vegetable garden, was also a passion.

Jack and Ginny were original members of St. David’s United Church, and he participated fully both on the board and with the Friendship Club.

Jack had a tremendous wit and sense of humour. He always had a twinkle in his eye and a smart remark for all he met. He was kind. Generous to a fault. Jack loved his small family, both human and cats, of which there were many generations. Jack was a voracious reader, who read several books each week. He also enjoyed crossword puzzles. Jack kept up with national and world politics and was a great sounding board for political debate.

Jack was predeceased by his wife of 65 years, Ginny, in 2018, his brother Murdoch (Buster), and his parents Murdoch Laughlin Beaton and Ethel Eleanor (nee Elsom).

As per Jack’s request, no funeral service will be held.

If friends so desire, memorial tributes may be made directly to the Habitat for Humanity, 210-805 Manning Rd NE, Calgary, AB T2E 7M8, Telephone: (403) 253-9331, www.habitatsouthernab.ca. Condolences, memories, and photos may be shared and viewed here.

The family wishes to thank Dr. Sheena Christie and Dr. Thomas Lim for their dedication, care and support.

Share Your Memory of
Jack
Upload Your Memory View All Memories
Be the first to upload a memory!
Share A Memory
Send Flowers