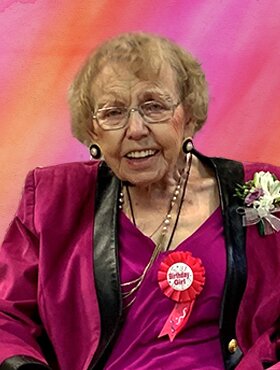 Frances Eunice Leroux (nee St. Clair) of Calgary, Alberta passed away peacefully on Thursday, November 24, 2022 at the age of 90 years.

Frances was born in Innisfail, Alberta on October 31, 1932. In her youth, the family moved several times around Alberta living in Dickson, Calgary, Warner, the ranch at Ricinus where some of her fondest childhood memories were made, and finally the brand-new town of Devon where Frances finished high school in Calmar.

Frances graduated from the Holy Cross Hospital’s nursing program in Calgary as an RN in 1954, a profession of which she was most proud. Later in life, she went back to school at Grant MacEwan College to become an Occupational Health Nurse and worked at NAIT in that capacity until her retirement.

Frances married Richard (Dick) Leroux in 1954 and settled in Devon where, in her own words, they felt fortunate to raise their four children. During these years, there were many memorable times that included camping trips and holidays with the Grahams and family dinners with the Leroux and St. Clair clans. Frances and Dick enjoyed watching and being involved in their children’s various sporting activities and the girls’ dancing.

Frances was particularly proud of the accomplishments of her children, grandchildren, and great-grandchildren and spoke of them often. She loved travelling and was a huge sports fan who faithfully followed the Calgary Flames, Calgary Stampeders and any form of curling possible. Frances spoke fondly of her and Dick’s involvement with the Lions and Lionettes in Devon and of her volunteer work at the Agape Hospice in Calgary. Knitting was one of her passions, and the intricate afghans and hundreds of dishcloths that she made for each of her children, grandchildren, and close friends will be cherished always.

A Celebration of Frances’ Life for family and friends will be held in July 2023. Condolences, memories, and photos can also be shared and viewed here. If friends so desire, memorial tributes may be made directly to the Agapé Hospice, 1302 - 8 Avenue N.W., Calgary, AB T2N 1B8 Telephone: (403) 282-6588, agapehospicecare.com/donate

Share Your Memory of
Frances
Upload Your Memory View All Memories
Be the first to upload a memory!
Share A Memory
Send Flowers