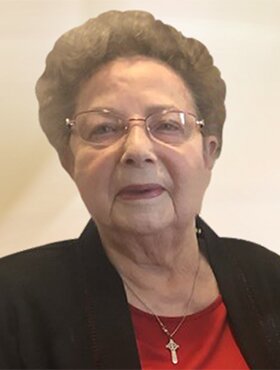 Julianna Magdalena Perks (Hagel) passed away at the age of 96, on December 4th at SkyPointe Hospice. Julie was born on February 26, 1926 to Felix and Marianna (Schmaltz) Hagel on the family farm north of Beiseker. She was sixth in a family of 11 and was the last surviving child. Julie graduated in 1946 from the teacher education program in Calgary, teaching in Bircham for one year before marrying Bill, her high school sweetheart, on July 15, 1947. In their first five years of marriage, Julie and Bill lived in six different places. Wherever they were living, Julie created a home. In 1951, with two children in tow, they settled in Alsask, Saskatchewan where they enjoyed their church and community for 15 years. During this time, Julie and Bill added six children to their family. In 1965, they moved to the railway station in Three Hills. Julie quickly became an active member of CWL, taught catechism and worked with the pastoral team.

Julie valued her family above all else in her life. She was a devoted wife, mother, grandmother, and great-grandmother. Julie baked, cooked, and cleaned to welcome her family on many occasions. She worked hard, looking after everyone and her kitchen was never closed. As her children got older, Julie went to work at Canada Post, before starting her ten-year career at the Royal Bank. In 1979, Julie and Bill moved to their own home in Three Hills. They enjoyed many years of retirement before moving to the chateau in 2013 where Julie could finally sit back and let someone else do the cooking. Over the last few years, she enjoyed reminiscing with family and friends during their many visits and phone calls. Julie remained strong in her Catholic faith rarely missing the daily Mass on TV and saying the Rosary numerous times a day. In 2018, she received her pin for 70 years of dedication to the CWL. Julie lived a full life and loved unconditionally, guided by the words “Jesus, I put my trust in you.”

Julie was predeceased by Bill, her husband of 68 years, her parents, Felix and Marianna Hagel, grandson Daniel Perks, son-in-law Clayton Lobe, and her siblings, and their spouses: Aloys and Jean, Matt and Mac, Felix and Theresa, Joe and Doreen, Lawrence and Joyce, Manny and Ruby, and Albert Hagel, Rose and Pete Mattern, Margaret and Bill Saunders, and Marie and Henry Funk.

Share Your Memory of
Julianna
Upload Your Memory View All Memories
Be the first to upload a memory!
Share A Memory
Send Flowers