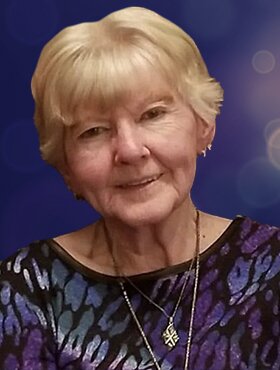 Rosemary Noll of Airdrie, AB, passed away peacefully with her family by her side on Tuesday, December 27, 2022 at the age of 70 years.  A loving wife, mother, grandmother, sister, aunt and friend, whose kind and gentle heart and warm smile will be missed by all who knew her.

Rosemary was born in Aberdeenshire, Scotland and came to Canada in 1958 where her family settled in Winnipeg, MB.  It is here in 1973 that Rosemary met the love of her life, Will.  It was love at first sight as Rosemary stated a number of years after they were married that when Will walked into the room that first time, she knew he was the one she was going to marry.  They were married in 1975 and began the adventures of raising 3 children.  In 1993 they moved to Calgary, AB, where they lived until more recently moving to Airdrie, AB.

Rosemary is survived by her husband of 47 years, Will; her daughter Jennifer (Ted) of Calgary, and two sons, Michael (Kim) and Richard (Kim) both of Strathmore, AB, and six grandchildren whom she loved with all of her being; Shayla, Kahlan, Paityn, Greyden, Alexis and Avery.  Rosemary will also be lovingly remembered by her four brothers, in-laws, nieces, nephews, cousins, and extended family from all parts of Canada, Scotland, and Australia.

A private, family celebration of life will take place at a later and warmer date.  If friends so desire, memorial tributes may be made to a charity of choice. Condolences, memories, and photos may be shared and viewed here.

Share Your Memory of
Rosemary
Upload Your Memory View All Memories
Be the first to upload a memory!
Share A Memory
Send Flowers