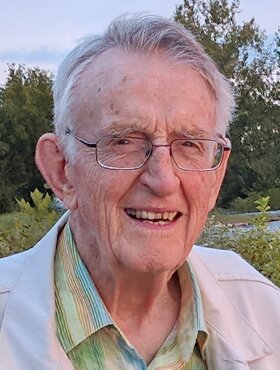 Don Crane was born in Winnipeg on February 24, 1928 to Jack and Lenore Crane. He had two younger sisters, Norma and Arlee, who both predeceased him. He spent most of his childhood years in Valparaiso and Tisdale SK, where he attended a one-room schoolhouse and helped with the Crane General Store.

In 1946 Don graduated from Tisdale High School and went on to receive his BSc in Geological Engineering at the University of Saskatchewan in 1952. Soon after, he started his career as a Geophysicist, working for Mobil Oil in many locations around Alberta.  He also spent long periods of time in the Arctic, exploring its vast geological possibilities. After working for several other oil companies, he cofounded Petrel Consultants, and later founded his own consulting firm, Finch Resources.

In 1954 Don married the love of his life, Vi, and for 68 beautiful years they grew ever closer together, raising 4 children, 11 grandchildren, and 9 great-grandchildren.

Don’s boundless curiosity, inventive mind, and practical intelligence led him to create with his hands, fix anything, and pursue a wide variety of hobbies.  Some of his endeavours included beekeeping, photography, genealogy, glass etching, bird watching, woodworking and planting hundreds of trees on the acreages where they lived.  Don loved the outdoors and all that it has to offer.  He and Vi also traveled extensively and enjoyed meeting people from around the world.  Even in his later years he never stopped learning, memorizing countless poems, learning how to use a computer and cell phone, and keeping up with the latest world events.

Don self published six books that capture his adventures as well as his positive approach to life. He also published The Crane’s Tale with The Pentland Press in 1999.  His legacy is also written in the hearts of all who knew him.

Don valued friends as much as he did family. His congenial personality made it easy for him to form friendships, many lasting his entire lifetime.  He took a sincere interest in everyone he met and made everyone feel comfortable and respected.  He was also a man of faith, integrating his curiosity in all things theological with a practical living-out of his beliefs.

His life is woven through all the lives he touched.

A memorial service will be held at St. James Anglican Church (6351 Ranchview Dr. N.W., Calgary), on Tuesday January 10, 2023, at 11:00 a.m. with a reception to follow. Condolences, memories, and photos can also be shared and viewed here.

Share Your Memory of
John Donald
Upload Your Memory View All Memories
Be the first to upload a memory!
Share A Memory