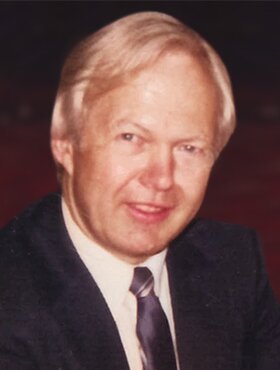 Grant Allen, beloved husband of Patricia, passed away on Tuesday, January 3, 2023 at the age of 97 years.

Grant is survived by his daughters, Susan Wendy Allen of Calgary and Deborah Eve Isabelle Allen (James Goebel) of Edmonton. Grant is predeceased by his wife Patricia Allen on April 15, 2017, parents, Isabelle and George Allen of Toronto, brother George and sister-in-law Dilys of Windsor.

The world has lost a remarkable man. Dad was a kind and highly intelligent person. He was intensely curious about the world and read extensively. His primary focus was to support his family in any way he could. He was also an avid volunteer.

Grant’s parents operated a market garden in Islington, Ont.  It was difficult work and they encouraged both Grant and George to attend university. He trained as a flight engineer for WWII, but the war ended before seeing action. He then attended the U of T on a government scholarship.

Grant graduated from the University of Toronto in 1949 with a Bachelor in Electrical Engineering. He met Patricia at the Annual Vegetable Growers Dance, and they married a year later. They then lived in Toronto, Sarnia, Ottawa, Montreal and finally moved to Calgary in 1962. He became the Head of Engineering for Western Canada for Molson’s Breweries Ltd., which required him to travel throughout North America and Europe for the many construction projects he oversaw.

Patricia was the founder of Kerby Centre in Calgary. Grant supported her from the earliest days – tallying up over 16,460 hours volunteering over 35 years. He became a Kerby fundraiser and a major contributor to the Kerby News. He also worked on numerous projects and advised on construction activities. He was very involved in the Elder Abuse Shelter project. Dad was Mom’s #1 supporter of the vision and mission of Kerby Centre.

This year Kerby Centre recognized Mom’s contributions to seniors with the naming of the Patricia Allen Boardroom at the Centre.  This was largely due to Dad’s persistence in ensuring Mom was recognized as the founder of Kerby.  Dad spoke of her accomplishments at the event.

Following Patricia’s death in 2017, Dad set up the Patricia Allen Memorial Graduate Scholarship within the Faculty of Social Work at the University of Calgary to support graduate students who majored in gerontology.  It was designed to develop professionals who were committed to enhancing the lives of older adults.

Dad had numerous interests and talents.  As a true Albertan, he hiked and skied in the mountains with family and visited back country lodges such as Mt Assiniboine and Twin Falls.

Anything mechanical interested him; whether it was hoisting an engine out of a car to rebuilding vehicles from scratch.  He loved cars, trains, tractors, boats, and airplanes.

Mom and Dad also renovated every home they lived in from their first bungalow in Sarnia with the dark brown interior, to raising the roof on the home in St Lambert, to completely renovating the mansion at 2101 8th Street SW, Calgary.  The last project took over 10 years of working weekends and weeknights.  That house was finally restored to its original magnificent state.

Dad was an adventurer at heart. He started sailing at the Glenmore Dam soon after moving to Calgary.  At the age of 40, Dad decided to take up ocean sailing.  He took classes in Vancouver to qualify to charter a boat and then headed across the Strait of Georgia to Victoria.  Dad joined the Canadian Power and Sail Squadron, took their courses and then taught them to other students.  He wrote articles for Pacific Yachting on Bareboat Chartering.  He ended up chartering 29 ships on the west coasts of Canada, US, and the Caribbean.  Of course, he was always the Captain.

Both Mom and Dad were avid travellers. Dad did the detailed planning and even learned Spanish to enhance their trips.  They travelled to all 7 continents – their last trip being a 46 day cruise from Hong Kong to Greece and ending in Istanbul.

He was always planning trips!  Following Mom’s death in 2017, the family completed a Patricia Allen Memorial Cruise of the Erie Canal and the Great Lakes.  He traveled extensively with his daughters right up to the start of the pandemic.  He then restricted his travel to Alberta.  Dad was a going concern right up to the end of his life and had planned an Ontario canal cruise and to visit Churchill, Manitoba to see the polar bears this year.

Dad was very social, but the pandemic curtailed this. However, he learned to use Zoom effectively and managed to avoid Covid.

Alas, we have lost a fine gentleman and father.  We will miss his wonderful smile and eagerness to enjoy every day.  We had hoped he would live to over 100!

A Celebration of Grant’s Life will be held at McInnis & Holloway (Park Memorial, 5008 Elbow Drive SW, Calgary, AB) on Saturday, February 4, 2023 at 2:00 p.m. Condolences, memories, and photos may be shared and viewed here.

Share Your Memory of
Grant
Upload Your Memory View All Memories
Be the first to upload a memory!
Share A Memory