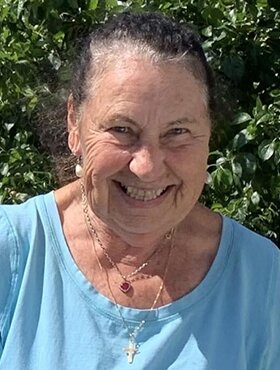 Irmi Franke, loved by all who knew her, passed away suddenly on Wednesday, January 4, 2023, of a heart attack, at the age of 80 years.

Irmi was born in Judenburg, Austria on June 3, 1942. Growing up, she enjoyed being out in nature, sitting in her apple tree eating the fruit.  Irmi often reminisced that when she was little, if she was given change for a treat, she would run to the store and buy fruit, rather than candies.  If you couldn’t find her, she would be climbing the hills and mountains near by.

Irmi graduated from the Sacré-Cœur Graz High School in 1956 continuing to Business School where she graduated from Handles Schule, Linz Austria, with a degree in 1957.  She immigrated to Canada in August of 1959.

Irmi met the love of her life, Wolfgang (Tim) and were married in 1962.  They started their life together in a trailer next to a Chinese Food restaurant.  After renting, they bought their first house in Bridgeland, raising their sons Norbert and Robert (Rob).  As the children grew, the family moved to Fairview.  Tim and Irmi got the “farming bug” and bought a farm just east of Strathmore where they grew hay.  Irmi was most proud of her fruit and vegetable gardens.

Besides being a loving Wife and Mother, she was a swimming instructor at Acadia Swimming Pool in Calgary, AB. After moving to the farm, she was the Greenhouse Production Manager at F.H. Rabb Greenhouse in Strathmore, AB.

Tim and Irmi sold the farm and moved into town in 1992, lovingly building up their home to the paradise it is today.  Irmi and Wolfgang traveled the world together. They went to Germany, Austria, Poland, and Mexico. They also loved to camp in their camper and travelled all over western Canada and the USA.  Sadly, she lost Tim in 2014.

She was a member of the Austrian Choir and other Choirs in the Strathmore area. She loved to sing. Irmi accomplished much through her life and was particularly proud of her garden, which she recently won an award for.  She had the greenest thumb known!

Irmi loved to swim at the Strathmore Pool and walk at the walking track.  She fondly mentioned the wonderful friends she made at both locations.

She will be most remembered for her smile and love of life. She lived life on her own terms and had a huge heart and helped many people.

Irmi is survived by a son and daughter-in-law, Rob and Nikki Franke and their children, Heather and Connor; a sister and brother-in-law, Evelyn and Hasny Hussein; a brother, Ernie Matthews; and numerous nieces, nephews, and many friends.

She was predeceased by her son, Norbert Franke and her husband, Wolfgang Franke.

A Celebration of Irmi’s Life will be held sometime in the spring when we can celebrate her life when the flowers are blooming.   Condolences, memories, and photos can also be shared and viewed here.

Share Your Memory of
Irmi
Upload Your Memory View All Memories
Be the first to upload a memory!
Share A Memory
Send Flowers