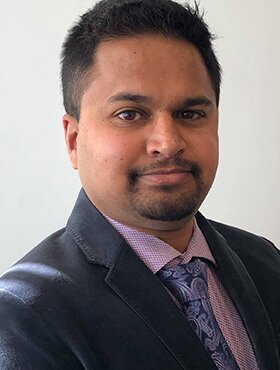 Rajeev was born in Calgary, AB on December 15, 1981 where he lived for most of his life, aside from small stops in Grande Cache, AB and Doha, Qatar.  He graduated from Sir Winston Churchill High School in 1999 and went on to complete his Undergraduate degree in Engineering from the U of C, graduating in 2004.

After graduating, he went on to share his talents at places such as Enerflex Ltd., Evans Consoles, JCI Filtration & Separation Inc., and OPSCO Process Corp, which was the last place he worked.

Rajeev was a man with passion, and his particular passions included The Calgary Flames, the WWE, NFL Football, golfing, enjoying his mother’s cooking, and spending time with his children.  His favourite Flames player was Jarome Iginla, and his dream was ultimately to watch the Flames win a Stanley Cup.  Rajeev was also very active in his children’s lives, having a profoundly deep love for them, often proving why he was the best father around.  To many of his friends, who strongly valued their relationships, he was often heralded as being kind and funny, exceptionally loyal, and a tremendous team player.  If you were on his team, he ALWAYS had your back.  He also had a beautiful relationship with his cat Sully, whose love lifted Raj up every time.  His greatest attribute will always be, however, being an amazing father.  He absolutely loved being a dad.

Rajeev is survived by his mother and father, Mangala and Vilas Joshi.  He is also survived by his brother, Vishal, his two beautiful sons Saajan and Ruchir, the mother of his children- Madhura, his very kind and caring in-laws Ramesh and Bharati Keshavan, and his cat Sully. We must also not forget his numerous loving aunts, uncles, and cousins found in places such as Edmonton, Toronto, Ottawa, Seattle, LA, and elsewhere- all of whom played a very important role in his life.

Share Your Memory of
Rajeev
Upload Your Memory View All Memories
Be the first to upload a memory!
Share A Memory
Send Flowers