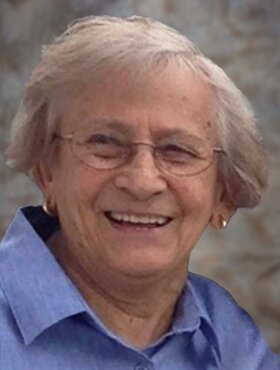 Maria Baji (nee Kallay), beloved wife of Julius Baji, of Calgary, AB, passed away peacefully on Tuesday, January 17, 2023 at the age of 94 years.

Maria and Julius, along with their children George, and Gabe, emigrated to Canada during the Hungarian Revolution of 1956, at great personal peril, but with a strong desire to build a better life in a new country.

They started their Canadian life in Lethbridge, AB, where they added one more son, Julius, to their family. They moved to Calgary, AB, in 1967 and then to Campbell River, BC, in 1980 followed by another move to Parksville, BC, in 1998 where they resided until 2022, when they moved back to Calgary, AB, to be closer to family.

Maria showed her love to her family through her exceptional cooking, and baking, routinely sending baked goods through the mail to family in Alberta. Over the years, she introduced her family to many culinary delights from Hungary, and was always keen to try any recipe, especially if it was a dessert to satisfy her sweet tooth! She also loved cross-stitch, embroidery, and bobbin-lacing.

Maria is also survived by her brother Gyuri, nieces Erica, and Susan, and their families. Maria was predeceased by her sons George, and Gabriel, daughter-in-law Pat, and her sister Edith. Condolences, memories, and photos can be shared and viewed here.

If friends so desire, memorial tributes may be made directly to the Salvation Army, which was always close to the Baji’s hearts, providing tremendous support when they arrived in Canada (1731 29th Street SW Calgary, AB, T3C 1M6) online at www.salvationarmy.ca, or by phone 403-410-1112.