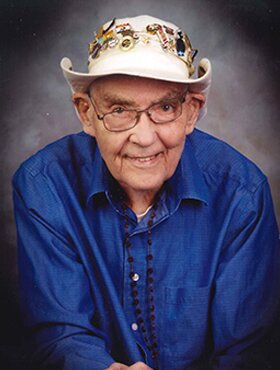 Raymond Russell Young beloved husband of the late Katherine Diane (nee Sarich) of Calgary, Alberta passed away on Tuesday January 17th, 2023, at the age of 89.

Ray was born in Banff, Alberta on July 30, 1933. He grew up in Banff, hiking, horseback-riding, hunting, and fishing with his younger sister Mildred, enjoying all the mountains had to offer.

He left home to attend the U of A in Edmonton to become a petroleum engineer. He used the slide rule for his work because the handheld calculator had not been invented yet. These were the early years of oil exploration in Alberta, and he was one of the lucky few to be hired by Texaco Canada.

He met his future wife at a dance in Edmonton in 1966, she was the one in the red dress and he was the one with the pipe. She picked him to dance. They were married six months later.

During his working years he excelled though he was offered many management positions, he did not want to give up his opportunities to go camping almost every weekend. Near the end of his career, he did accept a 3-year stint in Angola, Africa where he served as Chief Engineer for offshore exploration work. He tanned easily and often joked that he looked like a local.

After he retired, he spent the next many years piloting his Cessna, travelling North America in his many motor homes, and traveling the world with his wife Diane. Their true love was camping and cruising.

Raymond was predeceased by his wife Diane, his parents Raymond and Mabel Young, his sister Mildred, and her husband Jim Rouse.

Relatives and friends are invited to Prayers and Tributes at McInnis & Holloway (Crowfoot, 82 Crowfoot Circle NW, Calgary, AB) on Tuesday, January 24, 2023, at 7:00 p.m.

Funeral Mass will be celebrated at St. Luke’s Catholic Church (Corner of Northmount Drive & Northland Drive N.W., Calgary, AB) on Wednesday, January 25, 2023 at 11:00 a.m. Reception to follow in the Church Hall. Graveside Service to follow at Queen’s Park Cemetery. Family and friends who are unable to attend in person are invited to join Mr. Young’s service streamed live (below) on the day of the service. For those who are unable to view live, a recording of the service will be posted. Condolences, memories, and photos may be shared and viewed here.

We apologize if this is the case with today’s live stream but we want to assure you that this service will be recorded and uploaded following the service.

Share Your Memory of
Raymond
Upload Your Memory View All Memories
Be the first to upload a memory!
Share A Memory
Send Flowers