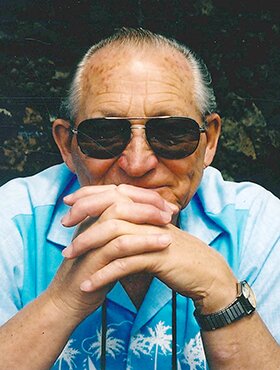 It is with great sadness that we announce the passing of Frank Kananen on Wednesday January 18, 2023, at the age of 89 years.

Frank was born in Barons, AB on February 12, 1933, to parents, Martha and Tom Kananen. Frank spent his childhood in Barons, AB where he met his very special friends Joan and George and his wife Barb. Frank and Barb were married on March 31, 1956, and were lifelong sweethearts, their love for each other steadfast. Frank’s last words on this earth were “I am going now, Barb is here”.

Frank had a long and distinguished career with Bird Construction spanning over 33 years which began in 1955 as a Junior Estimator until 1988 as Vice-President and Member of the Corporate Executive Committee. Frank had his own consulting business, Kananen Construction Consulting Ltd., from 1988 through 1994 at which point Frank retired. After retirement Frank and Barb travelled extensively. They also made several trips to Hawaii. A special place for them that they both loved.

Frank and Barb moved to Pincher Creek, AB from Calgary in 1992 and enjoyed their recreational property nearby in the Gladstone Valley. They welcomed friends and family to “The Property” to enjoy camping and to spend time in nature. There were many good times had around the campfire. Many memorable and fond memories were made at “The Property” with family and friends.

Frank is survived by his son and daughter-in-law, Mike and Sally Kananen; three grandchildren, Tim, Dan, and Alecia; and great-grandchild Olivia. He is also survived by his sister Sharon. Frank was predeceased by his wife Barb, daughter Tara, parents, Martha and Tom Kananen; brothers, Albert, Willard, Roy; and his sister Judy.

No funeral service will be held at this time. Condolences, memories, and photos may be shared with Frank’s family here.

We want to extend a special thank you to Frank’s physician, Dr. Steed, who provided such wonderful and compassionate care to Frank as he battled dementia and then cancer and the support that he provided to the family. As well, the wonderful care team at Tudor Manor in Okotoks. We are so grateful for the care and respect provided to Frank. You are truly angels on earth, and we will be forever grateful to you.

Share Your Memory of
Eldred
Upload Your Memory View All Memories
Be the first to upload a memory!
Share A Memory
Send Flowers