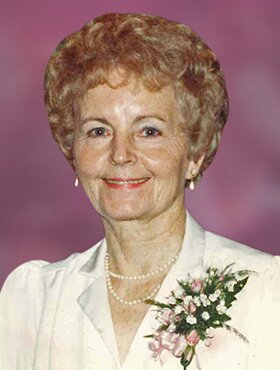 Obituary of Jane C. B. Ferguson

Jane Ferguson, beloved wife of the late James H. Ferguson of Calgary, AB, passed away on Thursday, January 19, 2023 at the age of 96 years.

Jane was born in Ayrshire, Scotland and as a young war bride sailed to Canada with Jim in 1943 aboard the Queen Elizabeth via New York. She and Jim travelled all over Canada to various radar postings. Jane was an active member of Knox United Church, UCW and the Shut-Ins Program. With Jim as Worthy Patron, Jane was Worthy Matron of Bow Valley O.E.S. No. 5 and also a member of Sakhara Temple No. 115. She was a member of Silver Springs Golf Club for thirty-five years.

Much loved, Jane will be remembered by her family and friends for her zest for life, her humor, caring and joy of living. She has waited 26 years to be with Jim again. There will be a new star in the heavens tonight.

Share Your Memory of
Jane C. B.
Upload Your Memory View All Memories
Be the first to upload a memory!
Share A Memory
Send Flowers