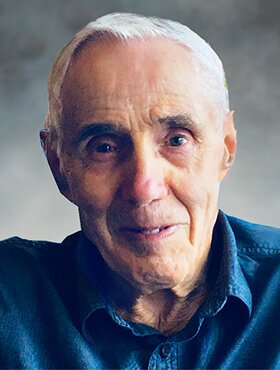 He was the grandson of prairie pioneers and was the beloved father to Stephanie Harfield, her husband Leagh Harfield and loving grandfather to Ben and James Harfield. Hugh was predeceased by the love of his life, Mary Ann Kerr; his parents, Ralph and Maude Jowsey; and his brothers, James and John Jowsey.

Hugh was lifelong friends with Earl and Verda Upshall and his nephew, Harold Jowsey. He had a wonderful life and was known for his strength of character, tremendous work ethics, self-discipline, and friendship to others. He loved farming, gardening, and beekeeping; and was an avid fan of the Roughriders, Flames, and Stampeders. His favorite activity was to cheer on his grandsons, and was extremely proud of all their achievements. He loved his grand dogs, Ozzy and Mushu. Hugh was an accomplished dairyman and while in his teens, an award-winning dairy competitor with the 4H, winning a trip to Toronto for the Canadian National Exhibition.

When Hugh was 24, he inherited the family farm and continued farming in the area. During this time, he worked as a carpenter at the potash mine, as a school bus driver, and meat cutter. He also successfully farmed near Regina where he survived a tornado that destroyed his home. He built his next home and then relocated to Okotoks. There, he worked at several grocery stores in Calgary and made lifelong friends.

Hugh was a horse racing enthusiast and loved long distance driving. He visited friends all over Canada and the US in his red Ford 150 pickup and enjoyed restoring his red Farmall-A tractor. He cared for many elderly relatives and was known for his selfless devotion to others and had many friends who became family to him. He frequently shared from the abundance of his garden, gave honey produced by his beehives and never missed the opportunity to pick up visitors at the airport. He had strong opinions about farming and politics, saying, “I may be wrong, but I know I am right”.

His family, many nieces, nephews, great and great-great nieces and nephews and friends, were blessed to know and love him and will never forget his many acts of kindness, wisdom, and integrity.

Funeral Services will be held at McInnis & Holloway (Park Memorial, 5008 Elbow Drive SW, Calgary, AB) on Saturday, January 28, 2023 at 10:00 a.m. Reception to follow in the Hospitality Centre at the Funeral Home. Family and friends who are unable to attend in person are invited to join Hugh's service streamed live (see below) on the day of the service. For those who are unable to view live, a recording of the service will be posted. Condolences, memories, and photos can also be shared and viewed here.

If friends so desire, his family requests that donations be made to the Saskatchewan 4H (4-h.sk.ca).

Share Your Memory of
Hugh
Upload Your Memory View All Memories
Be the first to upload a memory!
Share A Memory