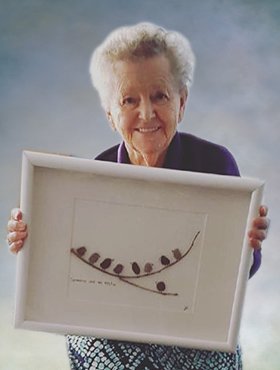 Sheila Lawrie passed away peacefully on Monday, October 7, 2019 at the age of 88 years.

Sheila was born on July 13, 1931 in Edinburgh, Scotland and immigrated to Calgary in 1956. Sheila and Tom settled in the neighbourhood of Parkdale where they enjoyed raising their family and happily resided there for forty-nine years. She received her nursing mid-wife designation in Scotland and continued her career at the Foothills Medical Centre, assisting in delivering babies. She was an avid volunteer with numerous charities including Parkdale and Queen Elizabeth PTA, the Alberta Cancer Society, Foothills Ladies Auxiliary, and Confederation Park, to name a few. Sheila enjoyed travelling with her family. She loved animals, crafts, gardening, camping, fishing, flowers, coffee, and a happy hour cocktail.

Sheila is survived by her daughters, Susan (Joe) Rougeau and Joan Lawrie; three grandchildren, Micayla (Scott), Jordana (Mark), and Trent. She was predeceased by her husband of fifty-six years Thomas Brownlee Lawrie on July 11, 2013.

In keeping with Sheila’s wishes, there will be no funeral service. Condolences may be forwarded through www.McInnisandHolloway.com. If friends so desire, memorial tributes may be made directly to The Calgary Humane Society, 4455 – 110th Avenue S.E., Calgary, AB T2C 2T7, Telephone: (403)205-4455, www.calgaryhumane.ca.