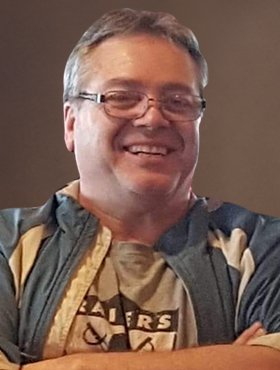 Frank Wright, best friend and Sweetheart of Jackie Wright passed away suddenly on Sunday, October 6, 2019 at the age of 55.

Frank absolutely loved spending tine in the kitchen and was well known for his great cooking for his family, friends and his four furry dogs.  Frank was an avid Calgary Flames fan, loved to travel, which always enhanced his extensive collection of shot glasses.  One of his most recent memorable trips was fishing in Alaska with his father-in-law Jim, son Devon and brothers-in-law, Kevin and Justin.  Frank was a superb and well-respected Contractor and the family Go-To-Guy! Frank was so proud of his two grandsons Chase and Ronan which his beautiful daughter Ariana brought into this world.

Frank will also be missed by his parents Larry and Cathy Wright, Jean Wilgus and Judy Wright; his two brothers Shane and Jesse; sisters-in-law, Deanna, Catherine, and Christine; and many extended family and dear friends.