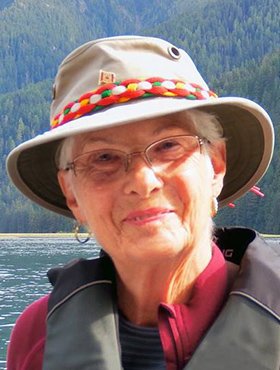 Dorothy was born in Edmonton, Alberta, the only child of Arthur and Esther Livingstone (nee Albright) who were school teachers. Dorothy grew up near the University of Alberta, rode horses at the Briarcrest Stables, earned her ARTC in piano, and always wanted to travel the world. She attended U of A and graduated with a B.Sc. in Home Economics in 1952. She then interned in dietetics at the Misericordia Hospital in Edmonton. Dorothy married Earl Lomas on July 3, 1954. They moved to Calgary, where they started a family and Earl articled as a lawyer. Raising the family included winter ski trips, family hikes and trail riding. In Calgary, Dorothy volunteered as a hospital dietician. She also found time to volunteer with the Junior League, Samaritan Club, Girl Guides, Festival Chorus, Trail Riders of the Canadian Rockies, and Kappa Alpha Theta. After the children were grown, travel began in earnest all over the world. After Earl passed away in 2009 travel continued with friends and family. Throughout her life Dorothy kept herself fit, active, and loved music. In recent years she was still attending regular swim fitness at the Glencoe Club and singing in a choir. She found great enjoyment in the outdoors, kept immaculate gardens at her home, and often commented on the wildlife visiting her backyard. Dorothy was also a regular at the Calgary Golf and Country Club where she loved to host dinner. Dorothy spent her last three years with many life-long friends at the Manor Village at Garrison Woods.

Dorothy is survived by daughter Margaret (Alex McNiven), sons, Rob, Stuart, and Ken; and grandchildren, Alex and Chloe (via Stuart), and Maddie and Emma (via Ken).

Current restrictions on gatherings mean that a memorial for Dorothy will be held at a later time. Condolences, memories and photos may be shared and viewed on Dorothy’s obituary at www.McInnisandHolloway.com. If friends so desire, memorial tributes may be made directly to the Heart & Stroke Foundation of Alberta, 200, 119 – 14th Street N.W., Calgary, AB T2N 1Z6 Telephone: (403) 264-5549, www.heartandstroke.ca. Many thanks to the caring staff at Garrison Manor, the Foothills Hospital, and the Southwood Hospice.