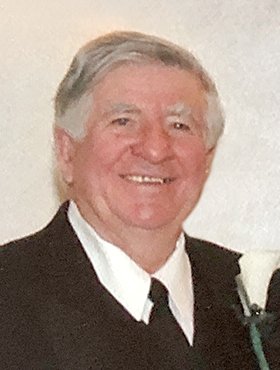 Mijo was born in Dekanovec, Medjimurje, Croatia on September 10, 1927. Mijo married Marija Kolonic in 1953 and immigrated to Canada in 1958, to Ottawa, Ontario. He moved to Montreal, Quebec in 1961 and later the same year to Calgary, Alberta.

Mijo accomplished much through his business life, becoming a general contractor in Calgary. He converted old homes into larger ones or duplexes, then built in Pump Hill, Ranchlands and Millrise, enabling an early retirement while he was still in his early fifties.

Mijo had a passion for the outdoors, and loved to go fishing and camping, as well as attend church picnics. Mijo’s most memorable vacation comment was when he was asked if he wanted to go to Hawaii and said, “I have all the Hawaii I need when I’m fishing near Canmore”.

Mijo had a wry sense of humor, and his favourite saying after a taste of wine or his own whisky was, “Man, that’s good coffee.” (borrowed from an old TV commercial for a brand of coffee).

He will be most remembered for leaving the former communist country of Yugoslavia, with his wife and first son Ivan, on an overnight trip across the border into Austria as refugees in 1957; a year later being accepted entry into Canada.

Mijo is survived by his two sons, Ivan and Mike, and their wives. Older son Ivan and his wife Danette live in San Francisco, California. Younger son Mike and his wife Mary live in Calgary, Alberta. Mijo is also survived by his younger brother Frank who lives in Calgary, Alberta, and sister Rozina who lives in Croatia, as well as numerous nieces, nephews, cousins, and friends.

Mijo was predeceased by his wife Marija in 1994, his parents, two brothers and three sisters.

Condolences, memories and photos may be shared and viewed on Mijo’s obituary at www.McInnisandHolloway.com.

Share Your Memory of
Mijo
Upload Your Memory View All Memories
Be the first to upload a memory!
Share A Memory
Send Flowers