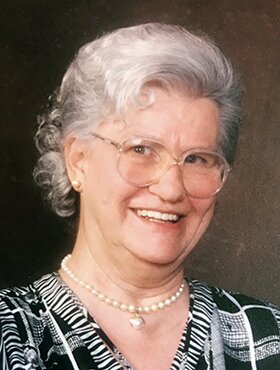 Marjorie was the guiding light of our family, and led a life of faith and service to others.

Marjorie married Franz McTavish, the love of her life, in 1941. During the war, Franz served in the Royal Canadian Air Force training pilots. After the war, they moved to Calgary and together started Chinook Flying Service, the first aircraft charter service in western Canada. Marjorie continued to run Chinook after Franz died in 1963 and later married her friend and protector, Gerald Stauffer. Together they built Stauffer Aero Ltd. No matter how busy she was with Chinook or helping manage Stauffer Aero, including all the strange and wonderful tasks she would undertake with enthusiasm, she found time to work on her charitable projects, such as making high quality outfits for children at the Sherriff King Home.

Marjorie always made time to help others and did so without seeking recognition or reward. Helping people and preserving people’s dignity was what mattered most to her. Marjorie was an accomplished concert pianist with a solid repertoire of classical, gospel, and music of the 40’s. She gave many an impromptu concert for visiting friends and family and loved playing “the oldies” for people at care-homes. She was also an active member of Music Coterie, a women’s musical club, for many years. Marjorie found great solace playing the piano, and could be found in front of it, playing her favorites, at any time of the day or night. She inspired many people with her music and talent.

When she was not helping people, she could always be found at her piano. She has given us so much love, laughter, wisdom, music, and most of all kindness.

Funeral Services will be held at Highwood Lutheran Church (419 Northmount Drive N.W., Calgary, AB) on Saturday, December 4, 2021, at 2:00 p.m. For those unable to attend, the service will be live streamed through the church at https://www.facebook.com/HighwoodLutheran/. In lieu of flowers, memorial tributes in Marjorie’s name may be made directly to the charity of your choice. Condolences, memories and photos may be shared and viewed on Marjorie’s obituary at www.McInnisandHolloway.com.

Share Your Memory of
Marjorie
Upload Your Memory View All Memories
Be the first to upload a memory!