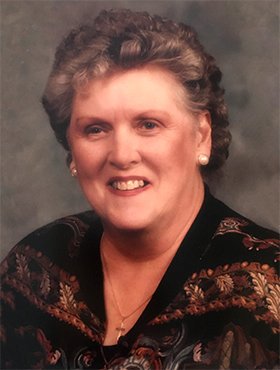 Anita passed away peacefully at the Strathmore Hospital, on Friday, December 27, 2019 at the age of 88 years.

Anita was born on March 24, 1931 to George and Lillian (nee Duffy) Lafontaine, the eldest of five children. After college, Anita worked as a librarian at NRC (National Research Center) at the Library of Parliament on Parliament Hill in Ottawa until she met the love of her life, Ted Bazant, and the love story began. They were married after a romantic, long distance courtship on July 31, 1954. They had three daughters, Maureen, Kathleen and Irene. Ted and Anita raised their children on the family farm northwest of Strathmore, where they remained until shortly before Ted’s passing. Anita loved the finer things in life such as her china and crystal collection, jewellery, and enjoyed sewing, gardening and reading. Her greatest joys in life were her children and grandchildren. She will be remembered as the best gracious, gentle, loving wife, Mother and Nanny anyone could ask for.

Funeral Services will be held at McINNIS & HOLLOWAY (Eastside, 5388 Memorial Drive NE, Calgary, AB) on Friday, January 10, 2020 at 2:00 p.m.  Graveside Service will be held at a later date.  Condolences, memories and photos may be shared and viewed on Anita’s obituary at www.McInnisandHolloway.com.If friends so desire, memorial tributes may be made directly to the Alberta Children’s Hospital Foundation, 28 Oki Drive NW, Calgary, AB  T3B 6A8, Telephone: (403) 955.8818. www.childrenshospital.ab.ca

Share Your Memory of
Anita (Lafontaine)
Upload Your Memory View All Memories
Be the first to upload a memory!
Share A Memory
Send Flowers