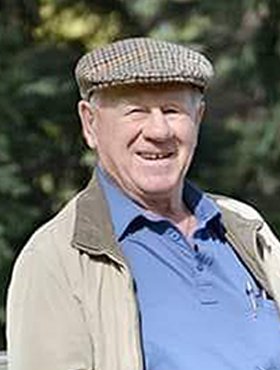 It is with great sorrow, that we announce the peaceful passing of Stanley Muraski, beloved husband of Ursula Muraski (nee Fuhrmann) of Calgary, AB on Saturday, January 4, 2020 at the age of 91 years.

Stanley attended Western Canada High School and took a business course at Henderson College, which lead to him successfully owning and operating his trucking company of 37 years, Royal Refer Ltd. Stanley was a member of the Canadian Wildlife Federation and enjoyed hunting, fishing, and tending to his flower and vegetable gardens. He spoke fondly of his days working at Union Packing and Burns Foods and his mini three-day vacation to Xtapia, Mexico. He will be remembered for his generous nature, which he showed by helping people who didn’t have a home to call their own or a meal to eat, his kind heart, bright soul, and most of all, his sense of humour. He lit up the lives of everyone he knew and loved and will be deeply missed by all.

Stanley is survived by his loving wife Ursula Muraski (nee Fuhrmann), stepchildren, Donald Fiell (Cindy) and Laurie Morris (Dave); four sons, Monti Jantzen, John Muraski (Rita), Andrew Muraski (Danielle), Stephen Muraski (Jorie); his three daughters, Sandra Harrison (Kenneth), Saje Muraski, Angela Moorman (Wes). He is also survived by his brother Lawrence (Helen) and two sisters Terry Krissie, and Delores Bell. Stanley was predeceased by his wife Delia, son Phillip Muraski, his mother and father Nellie Smerechinsky and John Muraski, as well as his brother and sister Fred and Margaret. Stanley was fortunate enough to have a total of 21 grandchildren, and 22 great grandchildren all of whom he loved and treasured.

Our family would like to extend our deepest gratitude for the amazing care provided to Stanley by Dr. Heather Gooden and the staff of the Kindness West Unit at Covenant Care-St. Teresa Place. You all mean a great deal to our family, and we will be eternally grateful for the care, love, and support you have shown us in the time that Stanley spent in your care.

Funeral Services will be held at McINNIS & HOLLOWAY (Chapel of the Bells, 2720 Centre Street North, Calgary, AB), on Saturday, January 11, 2020 at 2:00 p.m. Reception to follow in the Hospitality Centre at the Funeral Home. Condolences, memories and photos may be shared and viewed on Stanley’s obituary at www.McInnisandHolloway.com.

If friends so desire, memorial tributes may be made directly to the Canadian Wildlife Federation, 350 Michael Cowpland Drive, Kanata, ON K2M 2W1, www.cwf-fcf.org or to The Alzheimer Society of Alberta and the Northwest Territories, Administrative Office, 10531 Kingsway Avenue, Edmonton AB T5H 4K1.  Tel: (1-866) 950-5465, www.alzheimer.ab.ca.

Share Your Memory of
Stanley
Upload Your Memory View All Memories
Be the first to upload a memory!
Share A Memory
Send Flowers