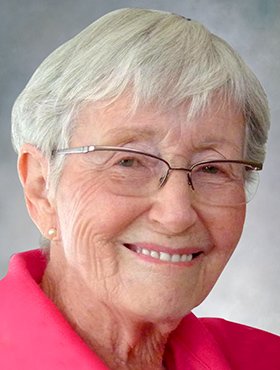 We are saddened to announce the peaceful passing of Glory Moore on Monday, January 6, 2020 in Calgary, Alberta.

Glory was born in Dovercourt, AB and raised on a farm on the Red Deer River with parents, William Murray and Josie Murray (Ens) and her siblings, Lenore, Harry, Bill and Mildred.

She graduated in Nursing from the Provincial Training School and was employed there until she and Marvin Stringer were married in 1947.  Together they resided in in Red Water, Drayton Valley, and Morinville, before settling down on Hulbert Crescent (near Sherwood Park) with their four children; they were part of a wonderful community during those years. Sadly, Marvin passed away after a lengthy illness in October, 1964, leaving Glory with the challenge of raising four children on her own.

Glory met and married Wilmot (Bud) Moore on March 17, 1969 and resided with the youngest five of their combined family of eight. She and Bud retired to Victoria and enjoyed their time and many travels.  They relocated to Calgary in 1995 and continued their travels, with their trip to Thailand being the highlight of their travels. She was a member and executive of the Royal Purple Elks, Sherwood Park, Vagabond Trailer Club, Victoria and was a volunteer with Hospice Victoria, and Hospice Calgary Living with Cancer Program and Rosedale Hospice in her eighties. Glory loved travelling, bridge, cribbage, reading, learning, spending time with friends and at the age of ninety-three, developed a passion for painting.

Glory will be remembered for her resiliency, sense of humor, her love of football and her feistiness.

Memorial Service will be held at the Banff Trail Community Centre (2115 – 20 Avenue NW, Calgary, AB) on Saturday, February 22, 2020 at 1:30 p.m. with Chaplain Carol Barwick officiating. Reception to follow. If friends so desire, memorial tributes may be made directly to Hospice Calgary, 1245 – 70th Avenue S.E., Calgary, AB  T2H 2X8, Telephone: (403) 263-4525, www.hospicecalgary.com. Condolences, memories and photos may be shared and viewed on Glory’s obituary at www.McInnisandHolloway.com.

Share Your Memory of
Glory Jessie
Upload Your Memory View All Memories
Be the first to upload a memory!
Share A Memory
Send Flowers