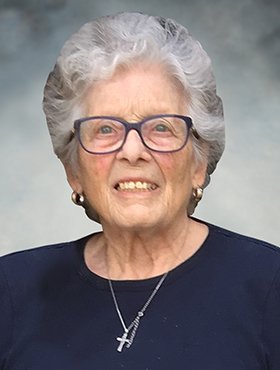 Bertha married Brian H. Varley in 1948. She emigrated from England in 1957, with her husband and three children.

Bertha loved her family, travel, the sea and the mountains. Up until she lost her sight, she was an avid reader and knitter donating scarves, mitts and hats to children in need. She also loved music, live theatre and concerts, especially classical music.

Bertha is survived by her children and their spouses, daughter and son-in-law Sharon and Rick O’Brien-Saretsky of Thunder Bay, Ontario, son and daughter-in-law Glen and Gail Varley of Brampton, Ontario and her daughter Barbara Hussain of Airdrie, Alberta. She is also survived by her brother and sister-in-law Rodney and Lynn Brewin of Rochdale, Lancashire, England, and her sister and brother-in-law Betty and Mike Widdop of North Bay, Ontario, Canada. Bertha is Nana to five grandchildren, and two step-grandchildren. She is great-nan to eleven great-grandchildren, five great-step-grandchildren; and great-great-Nan to one great-great-grandchild. She is also survived by numerous nieces, nephews, cousins, and friends.

Bertha was predeceased by her husband Brian H. Varley (in 1993); her parents Norman and Edna Brewin; brother Norman Brewin and sister Sylvia; and her son-in-laws Simon Hussain , and Ken O’Brien.

Funeral Services will be held at McINNIS & HOLLOWAY (Airdrie, 300 Towerlane Drive) on Thursday, February, 13, 2020 at 3:00 p.m.   Reception to follow in the Hospitality Centre at the Funeral Home . Condolences, memories and photos may be shared and viewed on Bertha’s obituary at www.McInnisandHolloway.com.

Share Your Memory of
Bertha
Upload Your Memory View All Memories
Be the first to upload a memory!
Share A Memory
Send Flowers