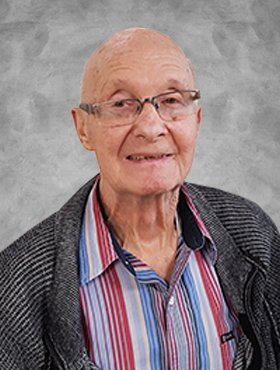 Donald Antonuk of Calgary, AB passed away peacefully on Sunday, February 16, 2020 at the age of 87 years.

Born in Calgary, September 18, 1932, Don grew up in the Victoria Park area and was involved in various sports including hockey where he played for the Calgary Buffalos Junior team. He attended Western Canada High School where he met his loving sweetheart, Margaret. They married in 1955 and enjoyed 46 years of marriage until her passing in 2001.

Don had a successful 36-year career with Canada Post and was known for his exceptional work ethic. He volunteered his time with numerous organizations, including Lifeline. Above all, Don was a devoted husband and a loving father and grandfather.

He will be dearly missed by his four children, Brett of Calgary, AB, Mark (Shelley) of Cowichan Valley, BC, Glen (Ian) of South Surrey, BC, and Diana Mathieson McNabb (Corey) of Calgary, AB; six grandchildren, Bobbi-Jo, Kristen, Brandon, Derek, James and Taran.

In addition to his wife, Margaret, Don was predeceased by his parents Fred and Mary, sisters Irene Walker and Doris Hlookoff, and brother Fred Antonuk.

A graveside service will be held for immediate family. A Celebration of Don's life for friends and family will be announced at a later date.

The family would like to thank the wonderful care staff at the Manor Village for taking such great care of our Dad over the past several months.

If friends so desire, memorial tributes may be made directly to the Canadian Mental Health Association – Calgary Region, Suite #400, 105 – 12th Avenue S.E., Calgary, AB T2G 1A1 Telephone: (403) 297–1700, www.cmha.calgary.ab.ca. Condolences, memories and photos may be shared and viewed on Don’s obituary at www.McInnisandHolloway.com.

Share Your Memory of
Donald
Upload Your Memory View All Memories
Be the first to upload a memory!