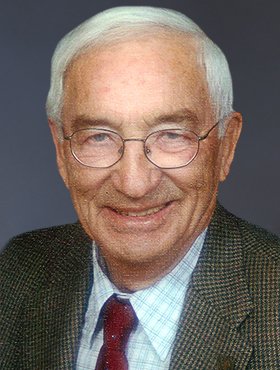 Rudolph Klassen beloved husband of Carmel Klassen (nee Despins) of Calgary, AB, passed away on Wednesday, February 19, 2020 at the age of 91 years.

Rudy was born in Hanna, AB, on September 30, 1928, the fourth child of David and Mary Klassen’s family of eleven. He grew up on the family farm near Linden, AB and attended local schools for his early education. After completing grade 10, he spent two years farming with his father before returning to complete his High School education. In the fall of 1950, he enrolled in a one year teacher education program at the Calgary Branch of the University of Alberta, and spent the summer months of 1951 as an officer cadet with the University Naval Training Division in the Royal Canadian Navy base in Esquimalt, BC. His first teaching position was in the one room Three Hills Rural School, followed by several years teaching Junior High School in Linden and Acme. During these years, he took summer courses and was several courses short of a B.Ed, when he left teaching in 1956 to enroll in first year geology at the University of Alberta. He graduated with a B.Sc and M.Sc in geology in 1960 followed by a Ph.D from the University of Saskatchewan in 1966. The same year he accepted a position as a Research Scientist with the Geological Survey of Canada in Calgary.

Rudy married Carmel Despins in 1967 and their union was blessed with four sons.  During the years 1973 to 1985, he taught evening classes as a Sessional Instructor in the Archaeology Department of the University of Calgary. During the following years, until his retirement in 1994, summers were spent conducting Surficial Geology mapping projects in Manitoba, Saskatchewan, Northwest Territories and the Yukon. Geologic maps covering 400,000 sq.km of terrain along with scientific papers were published by the Geological Survey of Canada and in scientific journals. After his retirement, he continued as Emeritus Research Scientist with the Survey until 2007, when he continued as a volunteer. Over the years, Rudy was a dedicated writer of letters to the editor of the Calgary Herald and a member of the World Federalists of Canada. He kept his boyhood interest in farming alive by raising some five hundred to three thousand pheasants with the help of four sons on our Calgary acreage and the family farm near Linden. The pheasants were marketed in Calgary restaurants or released for hunting on the family farm. Guests were assured of a pheasant feast when invited to the Klassens for dinner. Many happy, short summer holidays were spent at Shuswap Lake and most extensive traveling was done during their retirement years visiting their sons in various parts of Western world.

Besides his loving wife, Rudy is survived by his four sons, Roy (Tania), Vincent (Frédérique), Paul (Andréa) and Patrick (Jennifer);  and eleven grandchildren,Mika, Hanna, Alexandre, Emmanuelle,  Matthias, Lucas, Eva, Tomas, Caroline, Isabelle and Katherine.  He is also survived by his brother Erwin and sisters, Dorothy, Rae and Trudi.  Rudy was predeceased by his mother and father, Maria and David Klassen; sisters, Helen and Margaret; and four brothers, David, Bernhard, Eric and Edward.

The family would like to thank Karen Latter, Tammy Nurse,

Dr. Connelly, Dr. Snell, Dr. Ruis and the Foothills Cardiac nurses, and Longtime Physicians, Dr. Nadori and Dr. Mortis, for their kind and compassionate care of Rudy for many years. The family would also like to thank Monsignor Noël Farman and Nicole Lepage of Ste-Famille for all of their support.

Funeral Mass will be celebrated at Ste. Famille Catholic Church (1719 – 5th Street S.W., Calgary, AB) on Wednesday, February 26, 2020 at 11:00 a.m.  Reception to follow in the Church Hall. Condolences, memories and photos may be shared and viewed on Rudy’s obituary at www.McInnisandHolloway.com. If friends so desire, memorial tributes may be made directly to the Fondation franco-albertaine, Klassen Despins Fund for Ste-Famille, https://www.canadahelps.org/en/charities/fondation-franco-albertaine/

If friends so desire, memorial tributes may be made directly to the Fondation franco-albertaine, Klassen Despins Fund for Ste-Famille, https://www.canadahelps.org/en/charities/fondation-franco-albertaine/