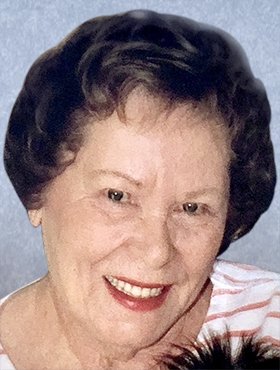 Anne Teresa Johnson of Calgary, AB, passed away peacefully on Wednesday, April 1, 2020, at the age of 89 years.

As a young adult, Anne left Moose Jaw, SK, for Edmonton, AB, where she made many life-long friends. She enjoyed a career in payroll working in the oil and gas industry. Anne was an active member of the Desk & Derrick Association and helped to plan numerous social gatherings. This love of organizing parties and get-togethers would remain with Anne for most of her life. She will be remembered for her warmth and laughter, enjoying the company of her many friends and family.

Anne’s work in the oil and gas industry led her to meet a salesman with Servco, Keith Johnson, who would become her husband on April 4, 1964. Within a few years, they welcomed two daughters – Patti and Peggy. Anne was a devoted wife and stay-at-home mom and became a very active volunteer at the girl’s schools, in Edmonton and Calgary. Anne organized and participated in Block Watch, Band Booster Club and Parent-Teacher Associations; and as always, making many friends along the way.

In 1974, Keith was transferred to Calgary. Although it was a sad departure for Keith and Anne to leave their friends, it opened up the opportunity to make many new friends – which they did. It didn’t take long to become very close friends with the neighbours on their new street and the Friday night get-togethers at the Johnson’s became a beloved tradition.

While in Edmonton, Anne began to play bridge, which she enjoyed tremendously. She soon found a group of ladies in her Calgary neighbourhood who shared her love of the game. In addition to the competitive gameplay, these evenings involved great food and lots of laughter.

Anne happily welcomed three cherished grandsons – Sean and Nathan (Patti’s sons) and William (Peggy’s son). These boys were blessed with the opportunity to have close relationships with their Grandma and brought her great joy and pride – both as little boys and as young men.

In 2006, Anne left the neighbourhood in Calgary that had been her home for decades to move to a condo in the Aviemore. Again, it was hard for Anne to say good-bye to her cherished friends – but in true Annie style – she made a lot of new friends at the Aviemore. As Anne’s health declined, several of these friends became invaluable helpers for her – allowing her to remain in the condo until her health required her to be hospitalized in December of 2019. Patti and Peggy are enormously grateful for their friendship with their mom.

Upon discovering that cancer had spread throughout her body, Anne was moved to the Southwood Hospice where she lived for the last three months. The care that she received went far beyond just medicine.  The nurses, aides and Dr. Bland would spend time talking with Anne, learning about her life. They would hug her and hold her hand for as long as she needed (prior to Covid-19 of course) and some would sing to her with their beautiful voices. Patti and Peggy are grateful, beyond words, to everyone at Southwood Hospice for making Anne’s last months on Earth as comfortable and peaceful as possible.

Anne is deeply loved and will be forever missed by her two daughters and two sons-in-law, Patti and Joe, and Peggy and Keith; as well as her three grandsons, Sean, Nathan and William.

Anne was predeceased by her husband Keith, mom Marie and step-dad Ron; as well as many cherished friends and beloved pets.

As Anne wished, there will be no funeral service. However, a celebration of life will take place at a later date once we are able to gather. Condolences, memories and photos may be shared and viewed on Anne’s obituary at www.McInnisandHolloway.com. To honour Anne’s tremendous love of animals, if friends so desire, memorial tributes can be made directly to The Calgary Humane Society, 4455 – 110th Avenue S.E., Calgary, AB  T2C 2T7, Telephone: (403)205-4455, www.calgaryhumane.ca.