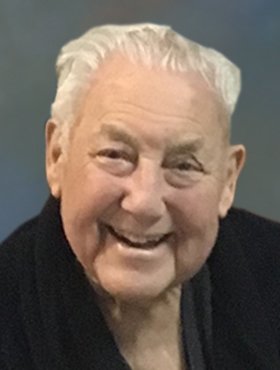 William Davidson, beloved husband of Marie Ellen Davidson (leNobel) of Calgary, AB, passed away on Monday, April 6, 2020 at the age of 88 years.

Bill was born on March 20, 1932 in Revelstoke, BC, where he grew up and attended high school. He went on to article under the 5 year chartered accountant course in Vancouver and passed his exams in 1956 while working with Helliwell Maclachlan and Company, now called KPMG. He left in the early 1960’s to join Rudd Goold & Elliott as a partner, and moved to Calgary in 1969 , later becoming the Calgary office managing partner until the firm, now Jarrett Goold & Elliott, merged with Price Waterhouse. Bill was a member of the Chartered Professional Accountants of Alberta. Bill retired in 1987.

Bill was the first of his family to leave Revelstoke. He travelled to Europe and climbed the Matterhorn before he was married. While working in Vancouver he became a competitive 5-pin bowler and met Henry leNobel.  His daughter Marie, would later become Bill’s wife. He married Marie on April 7, 1961.  Once married, with kids in tow, they spent many summers travelling between Calgary and Vancouver, stopping in the Revelstoke area to visit family and friends.  During this time Bill and Marie also found time to take their boys to Yellowstone National Park, the Grand Canyon, Disneyland, Disneyworld, Pinehurst and Greenbrier.  In the early 1970’s, Bill and Marie left their boys behind for a month and travelled around Australia and South East Asia. In 1990, Bill and Marie travelled to the bottom of the Grand Canyon on mules.  He said it was a little ‘hairy’ trusting the mules.  His most memorable vacation was in 2004 to attend the Masters, in Augusta, Georgia at the age of 72.  This even exceeded his hole-in-one experience at Pinehurst No. Two golf course in North Carolina.

Bill enjoyed bowling, golfing, and curling. Once retired and not participating in these activities, he volunteered with the Canadian Executive Service Organization (CESO), Canadian International Development Organization (CUSO), and acted as a Director at the Canyon Meadows Golf & Country Club in Calgary. CESO responsibilities enabled him to travel to many remote northern Alberta and NWT communities.  CUSO took Bill to Bolivia.  In 2000, he passed the Calgary Real Estate course and became a Real Estate Agent however he never actively pursued this venture. Not one to sit still, in 2003, Bill and Marie and partners purchased and operated the Chinook Bowladrome in Calgary for over ten years.

Besides his loving wife, Marie Davidson, Bill is survived by his two sons and daughters-in-law, Bruce and Patt Davidson, of Edmonton, AB; and Gary and Jane Davidson, of  Lititz, Pennsylvania;  five grandchildren, Keith, Rachelle, Christopher, Jessica, and Alexa; and one great-grandson Simon.

A Funeral Service will be announced at a later date. Condolences, memories and photos may be shared and viewed on Bill’s obituary at www.McInnisandHolloway.com.