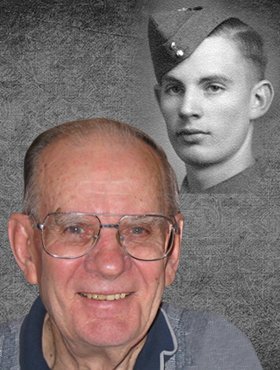 Edward (Ted) Girling, beloved husband of Joan Girling of Calgary, AB, passed away on Monday, April 6, 2020 at the age of 96 years.

Ted was born in Calgary, AB, on November 2, 1923. He married the love of his life Joan Girling, on May 25, 1946. He remained devoted to Joan throughout seventy-three years of marriage until her death in 2019.

Ted accomplished a great deal during his life, he was many things to many people, husband, father, grandfather, soldier, leader, humorist, poet, and craftsman. Next to his family his greatest source of pride was serving his country in time of war. This poem is dedicated to Ted:

The soldier stood and faced God,
Which must always come to pass.
He hoped his shoes were shining,
Just as brightly as his brass.

Step forward now, you soldier,
How shall I deal with you ?
Have you always turned the other cheek ?
To My Church have you been true?'

The soldier squared his shoulders and said,
No, Lord, I guess I ain't.
Because those of us who carry guns,
Can't always be a saint.

I've had to work most Sundays,
And at times my talk was tough.
And sometimes I've been violent,
Because the world is awfully rough.

But, I never took a penny,
That wasn't mine to keep...
Though I worked a lot of overtime,
When the bills got just too steep.

And I never passed a cry for help,
Though at times I shook with fear.
And sometimes, God, forgive me,
I've wept unmanly tears.

I know I don't deserve a place,
Among the people here.
They never wanted me around,
Except to calm their fears.

If you've a place for me here, Lord,
It needn't be so grand.
I never expected or had too much,
But if you don't, I'll understand.

There was a silence all around the throne,
Where the saints had often trod.
As the soldier waited quietly,
For the judgment of his God.
Step forward now, you soldier,
You've borne your burdens well.
Walk peacefully on Heaven's streets,
You've done your time in Hell.'

Condolences, memories and photos may be shared and viewed on Edward’s obituary at www.McInnisandHolloway.com.

Share Your Memory of
Edward (Ted)
Upload Your Memory View All Memories
Be the first to upload a memory!
Share A Memory
Send Flowers