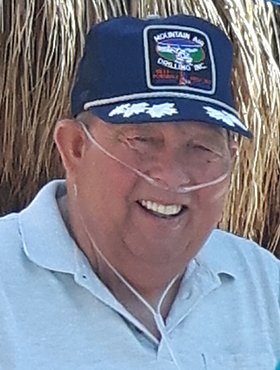 Terrence served his country for thirty-three years with the Lord Strathcona's Horse (LDSH). He started his career stationed in Calgary, AB, where his daughter Crystal was born. Then he went on to Iserlohn, Germany where his son, David was born. He was transferred back to Calgary for one year, then  to Valcartier, QC, and later to Oromocto, NB. Then, in 1979, he went back to Calgary with the family. After that he went unaccompanied for a short while to Moosejaw, SK and finally back to Calgary once more to join the family again, where he retired at the age of fifty.

As a child, Terry grew up spending time with his dad on his boat. As a man, he always wanted a boat of his own but was never able to fulfill this dream because of his many military transfers and of course, the cost. Once settled in Calgary, with no more transfers in sight, this part of the equation was solved. Now for the matter of the cost, Terry and his son David devised a plan in which each would tell their wives that buying the boat was the other one’s idea. At the end of the day it proved to be a great excuse for the families to spend time together which is all Terry ever wanted. He loved going on camping trips with his large family where he enjoyed dirt biking, quadding, side by siding and, of course, boating. One of his favourite things to do was pull his children and grandchildren on wakeboards, surfboards and tubes behind the infamous boat.

Terry also enjoyed traveling to tropical locations and bringing the whole family along. He was a great storyteller with a quick wit and his children and grandchildren loved hearing his jokes and stories of his many adventures.

A private Funeral Mass will be celebrated. Condolences, memories and photos may be shared and viewed on Terry’s obituary at www.McInnisandHolloway.com.

Share Your Memory of
Terrence Jock
Upload Your Memory View All Memories
Be the first to upload a memory!
Share A Memory
Send Flowers