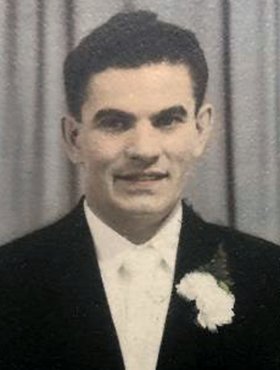 It is with great sadness that we announce the passing of Edward Hrynkiw on Thursday, April 2, 2020 at age 90 from complications caused by COVID-19.

Ed as everyone called him, enjoyed the good things in life and always encouraged the people around him to do the same. Born in 1930, Ed grew up during the great depression as the eldest of seven children on a Manitoba homestead, his parents immigrating from the Ukraine a few years earlier. The farm today is part of Riding Mountain National Park. In his early Twenties, Ed set his sights on moving to Calgary where he committed his professional life to the CPR, finally retiring in 1990. In Calgary, Ed met and married the beautiful nurse Joyce Cote, from Leoville, SK, in 1957. The newlyweds settled down in a nice, new house in Ogden, where they got to work on raising three strong daughters. Apart from trains and a good discussion around the kitchen table, Ed loved fishing and spending  time at the lake. Ed and Joyce and the three girls often spend the summers travelling back to Saskatchewan and Manitoba where they shared their lives with their families and the people who loved them. But Calgary was his true home and there was nothing better than the Calgary stampede, the Rodeo and the Grandstand.

He is survived by his wife Joyce Hrynkiw, daughters Barbara Collette and Bonnie Krall; and his three grandchildren Cara, Josclen, and Keely; his siblings Jean Azaransky, Stella Wilmont, and Donnie Hrynkiw; as well as many nieces, nephews; grand-nieces, and grand-nephews.

Ed was predeceased by his daughter Brenda Hrynkiw; his brothers Steve Hrynkiw and Michael Hrynkiw ; and sister Mary Twerdoclib.