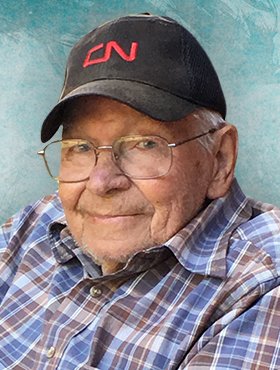 Willy Ankerstjerne, beloved husband of the late Viola Ankerstjerne (nee Black), passed away peacefully on Thursday, April 9, 2020 at the age of 87 years.

Willy was born in Aarhus, Denmark, immigrated to Canada in 1957, and in 1962 proudly received his Canadian Citizenship.  He lived in Calgary briefly before moving to Cochrane in 1970 with his wife, Viola, where he worked, raised his family and made life long friends, affectionately known as ‘The Cochrane Crew.’

In Denmark, Willy trained as a welder/fabricator before joining the Danish Air Force in 1953 where he was trained as a gunsmith. In 1957 he left the Air Force to immigrate to Canada.  He spent two years working on a farm and learning to speak English.  In his spare time he became an accomplished bow archer, having won many titles competing with the Calgary Archers Club.  Willy worked for Canada Post for fifteen years as a letter carrier.  Willy was also a talented carpenter and ran his own home repair business – if you needed it, he could build it; if it was broken he could fix it!  After leaving Canada Post, Willy was the building operator for Big Hill Lodge in Cochrane where he worked until his retirement.

Condolences, memories and photos may be shared and viewed on Willy’s obituary at www.McInnisandHolloway.com.

The family would like to thank the dedicated and caring staff at Cochrane Home Care.

Share Your Memory of
Villy (Willy)
Upload Your Memory View All Memories
Be the first to upload a memory!
Share A Memory
Send Flowers