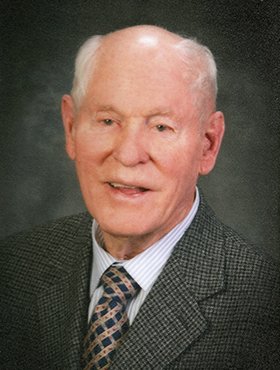 Ralph was predeceased by his wife, of thirty-five years, Phyllis (nee Dee) in 1984, and a daughter Diane, in 2001. Ralph’s cherished siblings, Irene, Ada, Art, Lillian, Greta, Mabel, and Ford all predeceased him.

Ralph was born in Grindstone, Magdalen Islands, Quebec, where he lived until he joined the Canadian Army to serve with the Royal Rifles of Canada, in WWII. It was in service to his country that he experienced life changing hardships when he and nearly 2000 other Canadian soldiers were sent to fight in the Battle of Hong Kong. On Christmas Day 1941 these Canadian soldiers were taken as Prisoners of War by the Japanese and were held in captivity for nearly four years. Part way through his time as a prisoner, he and others were sent to Japan as slave labourers, where he remained until the end of the war. These courageous soldiers indeed earned the title "hero" over these many years of starvation, hardship, and torture.

In spite of this incredibly challenging life experience, as well as challenges he faced as a child, Ralph did not let that stop him from moving forward in life. On his way home from Japan, Ralph was on a train with other former POW’s and when the train stopped in Calgary, he met Phyllis, his future wife. They married in 1948 and Phyllis would be key in his moving forward in life. After being discharged from the army, Ralph moved out to Calgary where Phyllis’ father helped him to secure work. Ralph was a reliable, hardworking employee for Cominco (now Teck Resources) for forty years, having achieved certifications as a Building Operator A and as a Fourth Class Steam Engineer.

It was not just surviving his captivity, meeting Phyllis, and gaining education for a career that changed his life, but through meeting Phyllis he also found a strong faith. While he had faith in God as a child and as a young soldier, it was when he came out to Calgary that he began a new journey in his Christian faith. Ralph became a devoted member of First Church of the Nazarene and faithfully served in many capacities throughout his life. He was still attending services until the month before he passed away. He greatly treasured his church friends, his pastors, church activities and serving.

Ralph loved spending time with and helping others…whether it was helping his children with work projects, going to grandchildren’s concerts or sporting events, helping with church projects, or helping a neighbour. Over his lifetime, he had enjoyed cross-country skiing, curling, RV camping, caring for and skating on the rink near his home, travelling to many countries, activities with the Thornview Seniors program, Cribbage at the Banff Trail Community Association, and his involvement with the Hong Kong Veterans Commemorative Association. Ralph was known for having a good sense of humour and for his quick wit.

He loved to be included in, or invited to do, things with family and friends alike. "Thanks for letting me in on this" was his standard expression, even if the event was to help with canning, doing dishes after a big family dinner, painting a fence, or helping with the church’s Mustard Seed meal ministry. Everyone that knew him was keenly aware that with each get-together there would be a lunch, dinner, or a coffee time invitation and they would never be able to pay. He loved to treat people and was generous beyond measure.

Ralph had amazing resiliency. When his doctor told him that he could no longer drive, due to his diminishing vision, he said "Well, I’m not going to let that stop me". He became proficient at knowing the many bus routes throughout Calgary. A cell phone was provided for him so that family could find him…his independent spirit remained intact!

However, in 2017 he had been experiencing many falls and had to leave his much loved home to receive the extra care that he needed. At the Colonel Belcher Care Center, he did what he could to stay strong and active by going to physio, playing Cribbage, and attending activities. However, it was not long until his sight was completely gone. Losing his sight was perhaps one of his biggest challenges in life. Phone calls and visits with people helped to ease this hardship. While he had enjoyed good health overall, Ralph’s health began to decline on February 20 and he passed away peacefully on the morning of March 14. Over those last few weeks he was so grateful for the visits, phone calls, and expressions of love for him. He especially enjoyed hearing and singing his favourite hymns.

The family wants to express their gratitude to those staff members at Colonel Belcher Long Term Care Center that worked closely with Ralph. The understanding, support, and kindness that you provided to Ralph, especially during those last weeks of his life, meant so much…thank you. We also want to thank the many caregivers from Classic LifeCare that had assisted Ralph. They were key in providing Ralph greater joy and independence in his life. We especially want to extend our gratitude to those that helped over the few weeks prior to Ralph’s passing…their support meant more than words can say.

Due to the pandemic restrictions in place, plans for a Memorial Service for Ralph will be announced at a later date.

If friends so desire, donations may be made to one of the following charities: Hong Kong Veterans Commemorative Association (hkvca.ca), War Amps (waramps.ca), Nazarene World Missions (cheque should go to First Church of the Nazarene indicating World Evangelism Fund on the memo) 65 Richard Way SW, Calgary, AB T3E 7M8.

Condolences, memories and photos may be shared and viewed on Ralph’s obituary at www.McInnisandHolloway.com.

Share Your Memory of
Ralph
Upload Your Memory View All Memories
Be the first to upload a memory!
Share A Memory