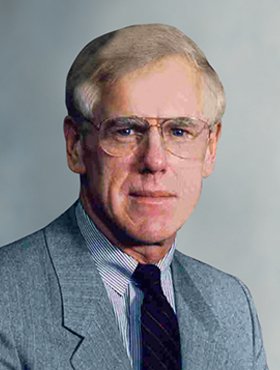 The family of Dr. Edward (Ted) Willson Best are sad to announce that Ted died at home on Good Friday, April 10, 2020, just prior to his 93 birthday. He is survived by his beloved wife Bette, whom he met in high school. They would have celebrated 69 years of marriage in August. He is also survived by his children, Wendy (Harry Wilmot); Randy (Medina Shatz) and Carolyn (Dave Steadman); his grandchildren Scott and Leah Wilmot; Brandon and Casey Best; Mike and Marney Steadman and their partners, and his great grandchild Cohen Wilmot. He was tragically predeceased by their son David. Ted was also predeceased by his sister Jean. He was very grateful to her for the care she provided to their parents. Jean’s daughter Carol and her children and grandchildren also survive him. Ted had a long, fulsome and wonderful life. He was born at home on Good Friday, April 15, 1927 in Windsor, Ontario, the son of Della and William (Bill) Best. Ted was very proud to be the son of a “Home Boy”, his dad having come to Canada from England as an orphaned indentured labourer at age 8, together with his 7 year old brother. Ted had many educational successes.  He received an Honours BSc and the gold medal in Geology from the University of Western Ontario. He was then awarded fellowships, scholarships and bursaries to take his PhD at the University of Wisconsin. Ted was the first person in his maternal or fraternal family to obtain a university degree, let alone 2. He later attended Harvard Business School in the Advanced Management Program.  After Ted completed his PhD, “T & B” (as we have called them for decades) packed up their meagre belongings and drove to Calgary, as did many of their friends from university, all arriving in Alberta when the oil industry was burgeoning. They maintained these friendships for the next 60+ years. Ted also had many career successes, first starting out as a geologist and progressing through to Chief Geologist, various VP positions and ultimately President of BP Canada. After retiring from BP, he was a partner with Foster Research, consulting in Canada and internationally.  From 1972 until 2010, Ted served as a Director for many provincial, national and international companies from BC to Newfoundland and SE Asia to Niger. In addition to his business activities, Ted was highly involved in industry associations, government committees and educational institutions, serving on a number as Chair or President.   In recognition of his contributions, Ted was awarded the U of C Presidents Life Time International Achievement Award; was named an Honorary Member of both the Canadian Petroleum Association and the Canadian Society of Petroleum Geologists and was elected to the Canadian Petroleum Hall of Fame. In his spare time, Ted loved sports cars; cycling; competitive gardening (flowers and veggies); photography; bird watching; playing scrabble; hiking; squash; skiing; fishing; camping and watching his grandchildren’s sporting activities or swimming with them at the Glencoe Club. His only failing was cooking.  All he could ever make were bologna sandwiches on white bread with chunks of hard butter, which our family ate every weekend at the ski hill.  T & B were extraordinary travellers. They seemingly have been everywhere, the more exotic the better - 70 countries and 7 continents. While some were just T on business trips , B accompanied him on many. Some of the most interesting (or exciting) adventures were driving a Range Rover through the Sand Sea in Libya; 3 month long geology horse packing trips through the Rockies; staying in a tent camp in Iran; taking a dhow across the Persian Gulf to Abu Dhabi; being served monkey, snake and bear in China; being in Prague when the Russians invaded and then escaping in a freedom train; attempting to mediate a settlement between Jordan and Iraq; visiting polar bears in Churchill; fishing in the Arctic Ocean; working in Newfoundland before it was a province and then returning 40 years later for a camping trip; hitchhiking in Norway; travelling throughout China more than 30 years ago; feeding chimpanzees in Sumatra; visiting icebergs and penguins in Antarctica on a Russian trawler; photo trip to the Serengeti; snorkelling the Great Barrier Reef; shopping in Moroccan markets; following Marco Polo’s Silk Route through all the “Stan’s”;  having his fortune told in Timbuktu; encountering native barricades in Copacabana and floods in Machu Picchu and being in the middle of a Birk’s robbery in Montreal. Although not as exciting, but certainly enjoyable, most summers T & B took our family on a camping trip in Alberta or BC, invariably coupled with bird watching and a side of geology. Hence, we all enjoy a good fault. T’s successes would not have been possible without the 69 years of support from B. She supported them financially early in their marriage and then assumed the very heavy load of parenting 4 children (who were only 6 years apart) and looking after their home life while Ted was away for long periods for many years, at first doing field work and later a multitude of business trips. Ted had health challenges in the last 2 years, during which Bette was his unwavering caregiver. It was an extraordinary partnership. Special thanks to Dr. Wicklum, caregivers Espy and Glenda and the Palliative Care team. To honour Ted, please go on a walk, hike or bike ride outdoors (maintaining a safe distance) and think of him. Even better, plan your own T & B type of adventure. As we currently can’t gather, a Celebration of Ted’s most interesting life will be held at a later date. Should you wish, please consider a donation in memory of Ted to Canadian Cancer Society www.cancer.ca 1-888-939-3333. Condolences, memories and photos may be shared and viewed on Ted’s obituary at www.McInnisandHolloway.com.

Should you wish, please consider a donation in memory of Ted to Canadian Cancer Society www.cancer.ca 1-888-939-3333.

Share Your Memory of
Dr. Edward (Ted)
Upload Your Memory View All Memories
Be the first to upload a memory!
Share A Memory
Send Flowers