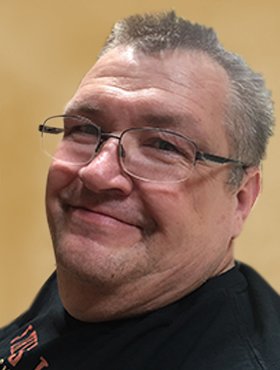 Denis Desfosses, beloved husband of Mary Kathleen Desfosses (nee Williams), and beloved father of Gabrielle Desfosses passed away on Sunday, April, 12, 2020 at the age of 53 years.

Denis was born in Edmonton, AB, on February 2, 1967 and in 1985 he moved to Calgary, AB, but still could never bring himself to root for Calgary Flames. Denis attended Caritas High School and later moved down to Calgary to study Electronic Engineering Technology at DeVry. He married Mary in 1993 and they became parents to Megan in 1994, followed by Gabby in 1996.

Denis was an avid woodworker and loved creating items for the people he cared about. He spent many hours turning beautiful pieces of art. For many years he was an enthusiastic Geocacher, travelling all over the North America to find as many as he could. He also enjoyed photography, spending time looking for the perfect picture.

He will be most remembered for his contagious laugh, outgoing personality, and his generosity. He loved to spoil those around him.

Besides his wife and daughter, Denis is survived by his parents, Roger and Gisele Desfosses of Edmonton, AB. Denis is also survived by his brother Daniel (Mary) of Sherwood Park, AB and sister Suzanne of Yellowknife, NWT, as well as numerous in-laws, nieces, nephews, cousins, and friends.

Denis was predeceased by his daughter Megan in October 2019.

A Celebration of Life  will be held at McINNIS & HOLLOWAY (Crowfoot, 82 Crowfoot Circle NW, Calgary, AB), on Saturday, September 25, 2021 at 1:30 p.m.  Condolences, memories and photos may be shared and viewed on Denis’ obituary at www.McInnisandHolloway.com.  Except for children under 12, if you have chosen not to receive the COVID-19 vaccine, we as a family ask that you please wear a mask.

Share Your Memory of
Denis
Upload Your Memory View All Memories
Be the first to upload a memory!
Share A Memory
Send Flowers