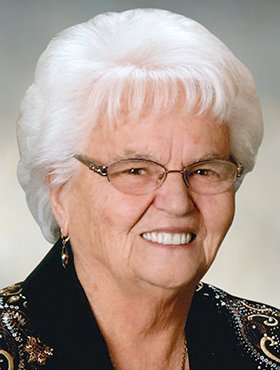 Pasqualina (Lina) Argento (nee Iuliano), loving wife, mother and grandmother passed away on Saturday, April 18, 2020, at the age of 84 years.

Lina was born at Easter, on April 20, 1935 in San Giacomo di Cerzeto, Calabria, Italy.  Lina immigrated to Calgary in March 1957 and was joined by her husband, Mario in August 1958.

Lina will be fondly remembered for her bravery, persistence, courage, strength and kindness.  Her feisty spirit and loving nature will be deeply missed by all who knew and loved her.

Lina’s greatest pride was her family.  Few things made Lina happier than when her family were gathered around the dining room table enjoying a meal.  She was the best wife, mother and nanna her family could have ever asked for.

Lina is survived by her husband Mario, her son Tony (Hilary) and daughter Franca (Victor); and three grandchildren, Nicholas, Angela (Scott) and Elizabeth.

A private service was held at McINNIS & HOLLOWAY (Chapel of the Bells, 2720 Centre Street North, Calgary, AB) on Thursday, April 23, 2020, with entombment at Queen’s Park Mausoleum. A Celebration of Life will be held at a later date for friends and family.  If friends so desire, memorial tributes may be made directly to the Tom Baker Cancer Centre at 1331 29 St. N.W., Calgary, AB T2N 4N2, www.albertacancer.ca/donate/. Condolences, memories and photos may be shared and viewed on Lina’s obituary at www.McInnisandHolloway.com.

On her behalf, Lina’s family would like to thank the wonderful staff at Intercare Chinook Hospice for the compassionate care they provided for Lina over the last few months.

Share Your Memory of
Pasqualina (Lina)
Upload Your Memory View All Memories
Be the first to upload a memory!
Share A Memory
Send Flowers