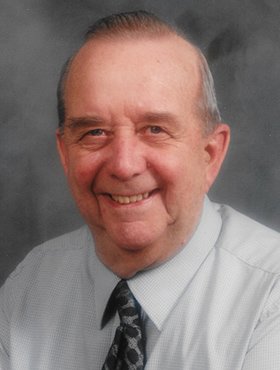 Derek immigrated to Canada from England in 1948 and married Myrna in 1949. He worked for many years at Westeel Rosco as a sheet metal worker and as a project manager. Derek’s life was characterized by service to his family, church and community. He served in various capacities with the Millican-Ogden Community Association and worked to address environmental, traffic, social and economic issues within the community. From 1978 to 1982, Derek served the District 93 Hospital Group in various positions, including as Chairman of the Board and as the Building Committee Chairperson for the expansion of the Rockyview General Hospital. After he retired, he served on the Board of the Ogden House Senior Citizens Club for seven years, including three years as President. For several years he devoted his time to looking after Myrna as her health failed.

Derek will be lovingly remembered by his daughters, Wendy (David) Hall and June Baxter; his son Dale (Marilyn); his grandchildren, Brian (Laura) and Cheryl Hall (Norm), and Derek (Sam) and Shannon Baxter; his great-grandchildren, Max and Chloe Hall, and Matthew and Eric Pang; his niece Sheila (Wayne) Swan; and great-nieces Jennifer and Haley Swan. He was predeceased by his beloved wife Myrna in 2015.

A memorial service for Derek will be held at a future date. Condolences, memories and photos may be shared and viewed on Derek’s obituary at www.McInnisandHolloway.com. We are grateful to the staff at Millrise Seniors Village, Mila Cerovsek and Dr. Bedi for their compassionate care and concern for Derek while he lived there.

Share Your Memory of
Derek
Upload Your Memory View All Memories
Be the first to upload a memory!