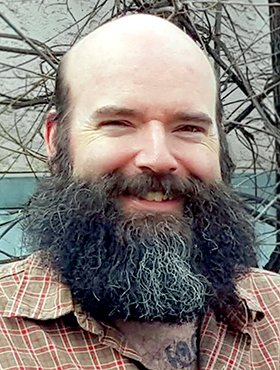 Our dear Jeff passed away suddenly on Monday, April 20, 2020 at the age of 39 years. Jeff was out enjoying a 4/20 walk and suffered a pulmonary embolism.

Jeff was born in Grande Prairie, AB, and grew up surrounded by family.  He was especially close with his sisters, Jessica and Jodie and his cousins, Ken and Chris. Jeff also grew up with many fond memories of camping with the family, duck hunting with his Dad, and had a love for Lego that continued into his adult years; he had just ordered a new 5-in-1 robot set while in isolation! Jeff loved camping gear, and aspired to be like his Uncle Ron by collecting all the best survival gear for any and every situation.

Jeff graduated from St. Joseph’s High School in 1999. He had joined Air Cadets as a young teenager, and had spent the summer after high school in Penhold, AB, getting his Glider Pilot’s License and shortly thereafter, taking his mom up with Dad watching. Jeff had found a passion in Air Cadets and flying, and continued working with Air Cadets for several years after high school, taking young cadets up in the gliders.

As a young adult, Jeff travelled to Thailand with his friend Ryan to visit his sister Jessica who was living there. Jeff’s travels also took him to Malaysia, and then finally to New Zealand, where he stayed for two years working in the service industry, touring around in a van, and learning to snowboard in the mountains outside Christchurch.

After returning to Canada in 2007, Jeff moved to Calgary to complete a Mixology Course at SAIT. As a young man out of high school, Jeff got a job at Gulliver’s Restaurant in Grande Prairie and found his calling. Jeff loved the service industry; working with people and bartending. For his last few years in Calgary, Jeff worked at The 4th Spot Kitchen & Bar, a restaurant that he loved and that fit his personality well.

Jeff is survived by his parents, Randy and Theresa Uzelman; his sisters, Jessica (Josh) and Jodie; her husband Malcolm (more brother than in-law); and his favourite niece and buddy Harlow. Jeff was very close to his Uncle Ron, Aunt Cindy and their children, Nicole and Nolan (Godson).  Jeff spent the first three years of his life being babysat by his Auntie Pat, Uncle Tom and cousins, Mike, Adam, Ken and Chris, with whom he has stayed in close contact. As well, he leaves behind numerous other aunts, uncles, and cousins.

The outpouring of tributes over this past week goes to show how large Jeff’s world of friends had become and how truly loved he was. Our family has enjoyed reading these tributes and we thank everyone who has shared memories, pictures, and words of support.

As our world is crazy at this time, a Celebration of Jeff’s Life will be held at a later date.   If friends so desire, memorial tributes may be made directly to the charity of your choice.  Condolences, memories and photos may be shared and viewed on Jeff’s obituary at www.McInnisandHolloway.com.

Share Your Memory of
Jeffrey (Jeff)
Upload Your Memory View All Memories
Be the first to upload a memory!
Share A Memory
Send Flowers