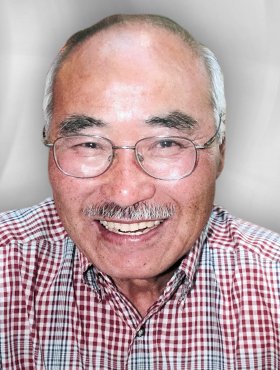 If friends so desire, in lieu of flowers, memorial tributes may be made directly to the Bowview Manor Recreation program through the Brenda Strafford Foundation, 4628 Montgomery Blvd NW, https://thebsf.ca/

Minsoo Choi of Calgary, AB, passed away on Thursday, April 23, 2020 at the age of 86 years. His beloved wife Rosemarie Choi (nee Meyer) was at his side.

Born in Korea to a large family of ten children, Minsoo left in 1963 to pursue his Doctorate in Chemical Engineering at the University of Vienna. There he met the love of his life, Rosemarie. Six years later, Rosemarie and Minsoo packed up a few precious belongings, most importantly their three month old daughter Susanne (Jim Morris), and moved to Toronto, ON. One year later, Minsoo, Rosemarie, baby Susanne and his best friend and younger brother, Jinsoo (Jemma) Choi, all loaded up into a blue Volkswagen Beetle and drove through snowstorms to make their new home in Calgary.

In Calgary, Minsoo’s family grew. His daughters Tina (Dan Cassie) and Marianne (Craig Anderson) were born and he was joined by his mother Hae-Shin, father Sanbong and siblings, Chungsoo (Saesoon) and Kyongsoon (Moonung.) He was also so happy to be closer to his beloved sister Sowha (Leckler) who had moved from Korea to California.

Minsoo joined the Association of Professional Engineers and for the next thirty-five years, he worked in the high rises of the Calgary oil and gas sector, the patches of Southern and Northern Alberta, and traveled overseas to work in the Libyan oil fields.

During this time, he could also be found singing in Calgary concert halls as part of the Calgary Opera choir, the German Canadian Mixed choir and the St. Matthew’s church choir, gardening in his yard, always smiling, always wearing the same tattered straw hat, driving in his Volkswagen van, windows rolled down, opera music blasting, his tenor voice booming (much to the incredible embarrassment of his teenaged daughters), moving rocks at his beloved Shuswap property (where he was known as the strongest, hardest working man on the beach), laying bricks in the basement where he would then spend time brewing beer, making wine and learning how to play oboe, trying to teach his daughters how to play tennis, camping in the Rockies, visiting friends and family in Germany, playing the incredibly loud and boisterous Korean game Yut with his brothers and sisters, and meticulously patching up old worn out coveralls that Rosemarie refused to touch since he had many new pairs he could wear (but apparently was saving those for a future son-in-law, a dowry of questionable value as all of these qualities were densely packed into a body that stood no taller than 5’6”.)

Minsoo was a loving husband, an inspirational father, a funny and great friend, a respectful, helpful neighbour, a professional colleague and a loyal family member. Everyone who knew him was better for it.

When his first grandchildren, Amelia and Nicholas, were born in Calgary, Minsoo and Rosemarie enthusiastically stepped into their new role as grandparents. Almost everyday, rain or shine, Minsoo could be found pushing a baby or toddler in a stroller. Four years later, Minsoo and Rosemarie moved to Nelson, BC, where he lived his dream of living in the country. He spent his days gardening, enjoying the view and telling his grandchildren (Amelia and Nicholas who visited often, and his new set of grandchildren, Wyatt and Jake who lived in the area), to stop picking up garter snakes.

Rosemarie and Minsoo eventually moved back to Calgary and two years later Minsoo moved into Bowview Manor. His time at Bowview was filled with kind and loving caregivers who treated him like family. Rosemarie spent most days at his side, but in the last few pages of this chapter, COVID - 19 protocols introduced a heartbreaking twist which meant Rosemarie was no longer able to be with him.

We are thankful for the loving care that he received time from the staff at Bowview. We are also so grateful that Rosemarie was able to be with him for the last couple of days and that he opened his eyes for long enough to see his daughters via video screen. It was a heartbreaking way to say goodbye but we will fill our hearts with the memories of this strong, smart, funny, resilient, quirky man and it will be these wonderful memories that will rise to the surface when we can all gather in the future to celebrate his life.

A private family graveside service will be held at Queen’s Park Cemetery. A Celebration of Life will follow when appropriate. If friends so desire, in lieu of flowers, memorial tributes may be made directly to the Bowview Manor Recreation program through the Brenda Strafford Foundation, 4628 Montgomery Blvd NW, https://thebsf.ca/. Condolences, memories and photos may be shared and viewed on Minsoo’s obituary at www.McInnisandHolloway.com.

Share Your Memory of
Dr. Minsoo
Upload Your Memory View All Memories
Be the first to upload a memory!