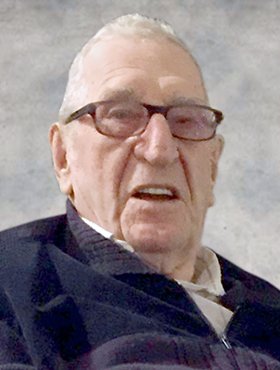 John was born in Hawick, Scotland on July 4, 1923. His family immigrated to Canada in 1925. John was raised in Red Deer and had many fond memories of his time there. He eventually moved to Calgary, making it his permanent residence.

John loved family gatherings, especially the annual Father’s Day barbeque. Christmas was always a special family time too, where he would enjoy a big plate of turkey dinner. John loved to watch The Lawrence Welk Show every Saturday night. John was an avid Stampeders fan and had season tickets for many years. He also looked forward to the Calgary Stampede and the parade each year. During his younger years, John enjoyed fishing and hunting.

John worked at Model Dairies for forty-three years, where he met his loving wife Wilda of sixty-five years. John and Wilda were married on May 15, 1948.

John was predeceased by his loving wife Wilda Wylie (Cawthorn) on June 22, 2013, and his two sisters, Margaret and Ellen.

A Celebration of John’s Life will be held at a later date. Time and date will be announced in the coming months.

Condolences, memories and photos may be shared and viewed on John’s obituary at www.McInnisandHolloway.com.