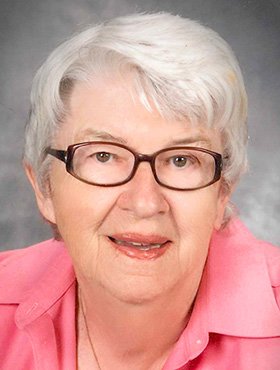 Marion Atkinson beloved wife of, Kenneth Atkinson of Airdrie, AB passed away on Sunday, April 26, 2020 at the age of 88 years.

Marion was born at Lloydminster, Saskatchewan on January 14, 1932. Marion’s first venture into the world was by Canadian Pacific Rail train to Streamstown, Alberta and then by carriage pulled by a team of horses to the farmstead north of Kitscoty, Alberta.  Upon graduation from Kitscoty Highschool, she completed a one year program at the School of Agriculture at Vermillion, Alberta.  In 1953 Marion graduated from the University of Alberta with a Bachelors degree in Home Economics.

She was then employed by the Alberta Government Department of Agriculture as a District Home Economist and served in the district offices in Vegreville, Lacombe, Edmonton rural south and finally as assistant supervisor with the Economics Extension Division in Edmonton.

In 1960, Marion and Ken were married and together, resided in Edmonton, Alberta, where each was pursuing their careers.  In 1970 they both made the decision to relocate to Lashburn, Saskatchewan where they joined Ken’s brother Dick in the family farm operations.

Marion and Ken enjoyed many years on the farm, raising their children and spending time with extended family and many close friends.  In 1998 they retired to Crossfield, Alberta to be closer to grandchildren...rarely missing a day on the golf course!  In 2013 Marion and Ken moved together to a senior’s residence in Airdrie, Alberta and Marion subsequently moved to an extended care facility in Calgary.

Marion thoroughly enjoyed music, an accomplished pianist herself, and singing at the United Church in Lashburn.  She enjoyed gardening, golfing, curling, crossword puzzles and of course, her many grandsons.  She was a member of the Lloydminster chapter (#76) of the Order of Eastern Star and a Lady of Al Azhar Shriners.

Marion is survived by her loving husband, Ken Atkinson, of Airdrie, Alberta; her daughter Gaylene (Michel) St. Louis and twin grandsons Andre and Holden St. Louis of Whitecourt, Alberta; her son Ian (Allison) Atkinson and grandsons Lachlan, Liam and Ryan Atkinson of Calgary, Alberta; her step-daughter Wendy (Karl) Fraser; and Mike of Calgary, Alberta; her brother-in-law Donald (Diane) Atkinson of Kirkton, Ontario; and a very special cousin “Billie” (Pete) Groneveld of Carseland, Alberta; along with numerous nieces, nephews and friends. Marion was predeceased by her parents Gordon and “Mamie” Inglis; and brother and sister-in-law Dick and Myrna Atkinson.

Marion’s family wishes to thank Evanston Grand Village and Intercare Brentwood Care Centre for their comforting care of Marion towards the end of her days as well as McInnis & Holloway funeral services in Airdrie, Alberta.

Share Your Memory of
Marion
Upload Your Memory View All Memories
Be the first to upload a memory!
Share A Memory
Send Flowers