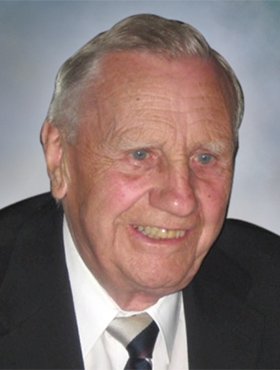 Cyril Luxton of Calgary, AB passed away peacefully at home on Tuesday, April 28, 2020 at the age of 89 years.

CY was born in Harrogate, England and was raised in Halifax, Yorkshire. After high school he trained as a medical radiographer, before serving two years in the Royal Army Medical Corps. After leaving the army he worked as firefighter for three years, before he and his wife Audrey, immigrated to Canada in 1957, where he worked for the government for over forty years. Cy started as a Radiation Surveyor in Chalk River, then moved to Pinawa in the Nuclear Research Centre, while also volunteering as a Deputy Fire Chief. In the following years Cy worked in the Winnipeg Post Office, for Parks Canada, and finally ten years in Calgary as a Labour Affairs Officer, before retiring in 1990.

After retirement Cy spent his time with his family, travelling back to England to visit relations, golfing and enjoying time with friends in the Legion.

Cy will be sadly missed by his loving wife of nearly sixty-six years Audrey, his three daughters, Jill (Scott), Susan, and Debbie; grandchildren, Stephen, Coral, Jesse, Jenny, and Derek; as well as his two great-grandchildren Harvey and Audrey.

In Lieu of flowers, if friends so desire, memorial tributes may be made directly to the Multiple Sclerosis Society of Canada, Calgary & Area Chapter, 150, 110 Quarry Park Blvd. S.E., Calgary, AB T2C 3G3 Telephone: (403) 250-7090, www.mssociety.ca. Condolences, memories and photos may be shared and viewed on Cy’s obituary at www.McInnisandHolloway.com.

Share Your Memory of
Cyril (Cy)
Upload Your Memory View All Memories
Be the first to upload a memory!
Share A Memory
Send Flowers