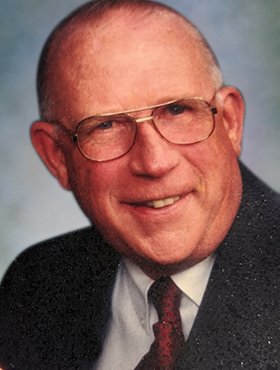 Frank Swanberg of Calgary passed away on Tuesday, April 28, 2020 at the Brentwood Care Centre.

Frank was born in Calgary and lived here most of his life, with the exception of seven years in Guelph. Frank and Lorna loved to travel across Canada, the United States and overseas. Frank was a kind and generous man, whom donated to several charities and others anonymously.  He was an avid bridge player and supporter of the Parkdale Nifty Fifties Senior Association.  He also volunteered much of his time, in support of his children’s activities. As a coin collector he shared this passion , by giving a commemorative coin to his grand and great-grandchildren on each their birthdays. Frank’s face would light up each time he saw any of his precious grandchildren and/or great grandchildren.

Frank is lovingly remembered by his children Rolf, Patti LaPorte (Dave), Chris (Doris) and Frank (Dawn); nine grandchildren, and ten great-grandchildren, with two more arriving soon! They gave him much joy.  He is also survived by his sister Irene, and brother Roy. Frank was predeceased by his loving wife of sixty-one years, Lorna, his brother-in-law Einar and sister-in-law Lynn.

A Memorial Service will be held at a later date. More details to follow. Condolences may be forwarded through www.mcinnisandholloway.com. Should friends or family so desire, donations can be made directly to Hospice Calgary, 920 7a Street NW, Calgary, AB T2M (info@hospicecalgary.com), the Parkdale Nifty Fifties Senior Association, 3515 5 Avenue NW, Calgary, AB T2N 0V7 or the Heart and Stroke Foundation (www.heartandstroke.ca).