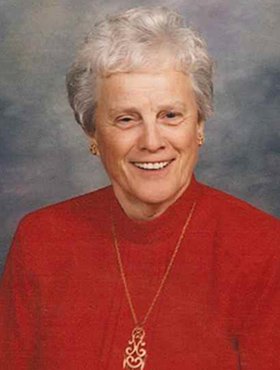 Blanche Barwell, beloved wife of the late Keith Barwell, of Calgary, AB, passed away peacefully on Friday, May 1, 2020 at the age of 93 years.

Blanche graduated from Moose Jaw General Hospital as a Registered Nurse in 1949.Throughout her career she worked in Moose Jaw, Regina, and Saskatoon, SK as well as Coquitlam, BC. She was the neighbourhood Nurse in every community they lived in.

Blanche met Keith on a bus traveling between Assiniboia and Moose Jaw. They were married in Moose Jaw, June 14, 1950. She was a loving mother to her two daughters and a Force of Nature in everything she did.  Her smile would light up a room. The world won’t be the same without her.

Blanche is survived by her daughters, Barbara and Marnie of Calgary; sister Ruth (Wilson) Banbury of Kamsack, SK, as well as numerous nieces, nephews, cousins, and friends in Canada and Scotland. Blanche was predeceased by her husband Keith and her parents, Annabella (nee Watt) and Alexander Fordyce.

There will be no service at her request. In lieu of flowers, donations can be made in Blanche’s name to a charity close to your heart. Condolences, memories and photos may be shared and viewed on Blanche’s obituary at www.McInnisandHolloway.com.

We want to thank Dr. Chacko and all the staff on the 4th Floor Carewest Garrison Green for the incredible care and support they gave Mom.

Share Your Memory of
Blanche
Upload Your Memory View All Memories
Be the first to upload a memory!
Share A Memory
Send Flowers