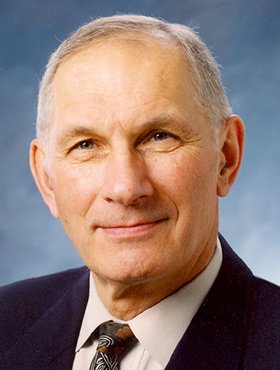 It is with profound sadness that we announce the passing of John Lagadin on Sunday, May 3, 2020, after a 32-month struggle with glioblastoma. John passed peacefully at home, surrounded by his loving family.

John was born in Port Arthur, ON where he also met his wife Connie. He graduated from Lakehead Technical Institute in Thunder Bay, ON and subsequently graduated from Michigan Tech with a BSc in Geological Engineering.

John and Connie started their family in Thunder Bay until John’s career in natural gas utilities brought them to North Bay, ON. His work eventually took the family out west to Sherwood Park, AB before they settled in Calgary, AB.

Despite his advancing career as a natural gas utility executive, John’s exceptional vision and entrepreneurial spirit drew him into the business world, first by forming and eventually owning Direct Energy Marketing Limited, one of the largest natural gas marketing companies in Canada. This successful company led to other innovative ventures including one of the first electronic trading platforms, Energy Exchange, and Alliance Pipeline — the latter of which he was awarded the Centennial Leadership Award in April, 2000 — the highest accolade offered by the Association of Professional Engineers and Geoscientists of Alberta. The Alliance Pipeline project was one of the largest capital projects in North America at the time. John was not only the visionary behind the project; he was also behind the related innovative patented technology.

John touched so many lives throughout his life with his gentleness, kindness, and welcoming nature. Many who knew John, even for a short time, have said that he left an indelible impression on them.  John was known for his strength of character, unrelenting drive, and wisdom; but above all else, John was a family man.  Despite his many successes in the business world, his greatest legacy will always be the family he left behind. They will forever hold countless cherished memories of John, including many ski trips to Panorama, gatherings at the family cabin on Moyie Lake, B.C., and special trips to Mexico.

He is survived by his wife of fifty-six years, Connie (nee Tuele); his children, John, Julie, Jill and James; their spouses, Cathy, Blaine, Eric and Romi; his eleven wonderful grandchildren, Mitchell, Kira, Natasha, Kylie, Kendra, Jared, Curtis, Cameron, Nicole, Alexa and Danielle; his brother Alex and his sister Marilyn (Eric) and his brother-in-law Earle (Marilyn). John was predeceased by his father Nicholas, his mother Mary Lylyk, his stepfather Michael Lylyk; his mother and father-in-law Margaret and Earle Tuele and his sister-in-law Donna Shilliday.

The family would like to express its deepest gratitude to all the doctors and their teams that were involved in John’s care. Special thanks to Dr. John Kelly and Chelsea at the Foothills Hospital, Dr. Gloria Roldan-Urgoiti and Dr. Dean Ruether of the TBCC, the palliative home care team and his caregiver, Misty, for their care and compassion.

Due to COVID-19 restrictions, a private service will be held on Thursday, May 7, 2020 at St. Albert the Great Catholic Church in Calgary followed by a burial service at St. Andrew’s Cemetery in Thunder Bay, Ontario. Condolences, memories and photos may be shared and viewed on John’s obituary at www.McInnisandHolloway.com.

If you so desire, memorial donations can be made to the Emma Maternity House Society, which is a local Calgary charity that supports homeless pregnant women. You can donate via Canada Helps https://www.canadahelps.org/en/ or directly via https://www.emmahouse.ca/donate-1 .